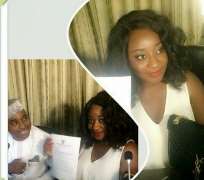 Who would believe that Superstar actress Ini Edo would find it exciting to go back to school to study despite the nature of her job. the actress has just been offered a scholarship to study Law in the National Open University in Nigeria.

Excited Ini shared the photo of her admission letter with her fans saying it was a dream come true. very soon the beautiful actress would be a degree holder in Law.

We can recall that some Nollywood Actors dived into law school even when they were still acting, which has helped them in some way and has given them an upper hand to go into politics, typical examples are kenneth Okonkwo and Richard Mofe Damijo. Congratulations to the actress.