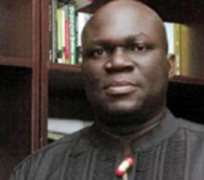 The Presidency has ruled out the possibility of engaging in what it called 'trade by barter'  in securing the release of the  over 200  schoolgirls abducted from the  Government  Secondary School, Chibok, Borno State, by Boko Haram insurgents  on April 14.

It said that in asymmetrical warfare, dialogue could also be difficult because the enemies  were usually  faceless.

Special Adviser to the President on Media and Publicity, Dr. Reuben Abati, said this in an exclusive interview on Wednesday.

He was responding to a question on whether President Goodluck Jonathan would set up a committee to negotiate with Boko Haram for the release of the   girls since the Federal Government had  said it was open to dialogue on the matter.

Boko Haram Leader,  Abubakar Shekau, had in a video released on Sunday, said the sect was prepared to swap the girls for its members detained by security agencies across the country.

But Abati stressed that  what government had said was that it had always adopted all options in dealing with the security challenge in the country.

He  added that there were  already ongoing processes and standing committees to that effect.

The  presidential spokesman explained that government had been adopting what he  called soft approach to insecurity alongside the military operations.

Part of the product of that approach, he said, was when the President released some detainees, including women, children and young persons   who were in detention sometime last year.

'In this kind of asymmetrical warfare, even dialogue can be difficult because the enemy is faceless.

'Nonetheless, what government has said is that it has always adopted all options in dealing with the security challenge and there are already ongoing processes and standing committees. Government has said clearly, however that any Boko Haram member who is ready to lay down his arms and repent, the door is open to such members.

'The key word that government has ever used is dialogue and that is dialogue with stakeholders and possibly repentant insurgents.

'In this regard, it is worth recalling that there are existing committees that have been saddled with the responsibility of operationalising what the National Security Adviser once described as the soft approach in the country's counter-terrorism strategy.

'First, we have the presidential committee on dialogue that is saddled with the responsibility of looking into the matter of extremism in the North-East.

'That standing committee has since submitted a report and the report has led to a number of actions by the President, including the Presidential Initiative in the North-East known as PINE, an economic recovery programme.

'You will also recall that at a point, the President released some detainees, including women, children and young persons belonging to Boko Haram who were in detention.

'Recently also, the President set up the presidential fact-finding committee on the Chibok abduction. Part of the mandate of that committee is to visit Chibok, relate with the parents of the girls, relate with stakeholders and try to see how assistance can be given to the girls who have been released and also their families and what useful information can be collated.

'All of this involves dialogue,   looking at many options. I don't think government will come up again and set up a special negotiating committee. There is a soft approach that is already in place and it is going on simultaneously with the military operation.

'It is also important to note that the Presidency  is not relying solely on a whole of government approach. Government is combining whatever it does with a whole of society approach. So there is that soft approach which includes dialogue, talking to stakeholders.' - Punch.