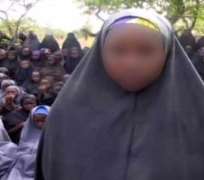 The offer by the international community to help locate and bring back over 200 schoolgirls from Boko Haram's captivity is a development that calls for the full support and cooperation of Nigerians. After much dithering, occasioned by unnecessary self pride, a clueless Nigerian government caved in to pressure last week and, reluctantly, decided to avail itself of the wealth of experience and resources of the United States of America, Britain, France, China and Israel to combat the Islamist terrorists and bring back the abducted girls. We believe that the best way to defeat terrorism is through international cooperation. This is not the right time to flaunt national pride.

Before accepting the offer, whether in words or in actions, there was nothing concrete from the Nigerian government to inspire hope and confidence that the girls, who were preparing for their final year examinations before they were corralled into lorries and driven off, would ever breathe the air of freedom again. It took the lethargic National Security Adviser, Sambo Dasuki, the security chiefs and the Inspector-General of Police, Mohammed Abubakar, 24 days to visit the town of Chibok, where the abduction took place. It was the first Federal Government delegation to visit the town. Amnesty International, the global human rights group, came up with a damning report of how the military squandered the chance to save the girls, even after receiving advance notice of the impending attack on Chibok.

While the parents and other Nigerians waited in shock and bewilderment for words of comfort and hope, all that President Goodluck Jonathan could muster, in a media chat, was that he did not know the whereabouts of the girls, three weeks after they were taken into captivity. He would later come up with an unconvincing promise in his address to the World Economic Forum staged in Abuja that 'the kidnapping of these girls will be the beginning of the end of terror in Nigeria.'

It actually took a protest by the mothers of the abducted girls and some other concerned Nigerians to draw attention to the plight of the girls, many of whom are now reported to have been forcibly converted to Islam. And, Jonathan, in his characteristic cavalier manner, had thought that the protests would 'fizzle out' after a few days and, thereafter, it would be business as usual. He however did not reckon with the wave of international reactions that the horrendous incident has so far provoked.

The reactions, from far and wide, have been difficult to ignore. What started as a demonstration, with the hashtag, #Bring Back Our Girls, has taken on a life of its own. In practically all the major cities of the world, there have been calls for the liberation of the abducted girls, who dared to dream of acquiring education in an environment that has spawned over 10 million out-of-school children, the highest of such in the world. Personalities such as President Barack Obama of the US; his wife, Michelle; David Cameron, the British Prime Minister; John McCain, an American senator; Hollywood actors, sports personalities, among others, have all risen to identify with efforts to bring back the girls.

In a most indicting reaction, the former US Secretary of State, Hilary Clinton, described the abduction as an abominable and criminal act that deserved the 'fullest response possible from the government of Nigeria.' Her verdict was that 'the government of Nigeria has been, in my view, somewhat derelict in its responsibility towards protecting boys and girls, men and women in northern Nigeria over the last years.' After accusing Nigeria of making 'bad choices' instead of 'hard choices,' she then advised, candidly, that the country should 'accept the offers being made,' while Nigerians should demand accountability from their government.

It is indeed bewildering that Nigeria has waited this long to seek assistance from countries with expertise in counter-insurgency and asymmetric warfare. This is even more so that it has become increasingly clearer that the Nigerian military efforts, as seen so far, have been unable to contain the deadly adventures of Boko Haram. It is also embarrassing that people who have not been able to proffer credible solutions to the incessant bloodbath in the country are now giving dubious conditions to those who have offered to help. With the disposition of appeasement, it is easy to understand why Boko Haram has been waxing stronger despite efforts to end its mayhem. It is for the same reason of living in denial that some Nigerian officials reportedly visited the US and convinced the government of that country not to designate Boko Haram as a terrorist organisation, despite the obvious fact that the group had become more deadly than even al-Qaeda itself.

Terrorism can only be effectively contained with the cooperation of the international community, especially in the areas of intelligence gathering and sharing. If we had shown ourselves to be capable of rescuing the girls, there would have been no need to seek assistance. For every day that Boko Haram continues to vent its sanguinary fury on the Nigerian society, and keep those innocent girls in captivity, the hearts of the civilised world will continue to bleed for our country.