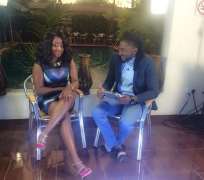 Having smooth shiny legs sure draws attention to the contours of your body without you seeming to try too hard. This didn't seem a flop for Nollywood beautiful actress Ini Edo- Ehiagwina who rocked a short fitted dress and lovely pink celeb fave Valentino studded rock heels to a recent interview on Jara Television show.

The beautiful wife of Nigerian Businessman Phillip Ehiagwina looked every inch a diva in her dress which flaunted her curves well, with lovely smokey eye and nude lip makeup.

No doubt, the Akwa Ibom state born actress who started her acting career in the year 2000 is one of Nigeria's leading most beautiful actresses. She is a talented star.

Ini Edo who rocked this same shoe in a photo she released on social media a while ago and to the 'Knocking on Heavens door' movie Premiere and now to the Jara TV Show which is hosted by Nigerian comedienne Helen Paul, popularly known as 'tatafo' and Nigerian model and Showbiz personality Uti Nwachukwu. "My Wish This Year Is Peace for My Country" – Genevieve Nnaji