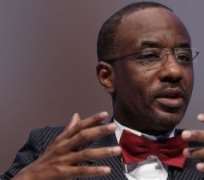 A Federal High Court in Lagos on Monday restrained the Financial Reporting Council of Nigeria from conducting investigations into alleged financial impropriety levelled against the suspended Governor of the Central Bank of Nigeria, Mr. Sanusi Lamido Sanusi.

In his ruling in a suit instituted by Sanusi to bar the FRCN from probing him, Justice John Tsoho held that given the circumstances, the FRCN had not complied with the provisions of the law.

'I do not accept the stance of the defendants (FRCN and its Executive Secretary) that they acted within the stance of the FRCN Act and complied with the principles of natural justice. It is glaring that if they kept the letters of the Act they did not respect its ennobling position,' Justice Tsoho said.

In granting Sanusi's prayers, the judge said that allowing the probe to go on could be likened to the case of the proverbial cockroach, which found itself in the midst of fowls.

He said the cockroach under such circumstance was presumed guilty, adding that 'since prevention is better than cure' the court should rule against the proposed investigation.

'The defendants have acted in breach of natural justice, denied the plaintiff fair hearing and acted in bad faith,' the judge said.

He further held that considering the facts and the prevailing circumstances, the probe was tantamount to a breach of natural justice since the briefing note recommending Sanusi's removal as CBN governor was the pivot upon which FRCN action was hinged.

'It is presumed that jaundiced recommendations can go a long way in affecting the decision of the government,' the judge said.

Sanusi had filed the suit challenging the legality of the proposed probe by the FRCN.

He had urged the court to stop the investigation into the CBN records during his tenures as governor on the ground that FRCN had found him guilty before commencing the probe.

The judge said the commission had already reached its conclusion as to the culpability of Sanusi, given the commission's briefing note attached to the letter suspending him as the CBN governor on February 20, 2014, and newspaper advertisement inviting him for the probe,.

Sanusi, through his counsel, Mr. Kola Awodein (SAN), insisted that the suspended CBN boss had not been given the benefit of fair hearing.