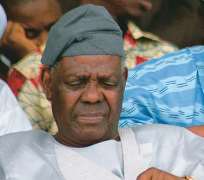 The Presidency has described a statement credited to the interim National Chairman of the All Progressives Congress, Chief Bisi Akande, that the country is on auto pilot as unfortunate and unpatriotic. Special Adviser to the President on Media and Publicity, Dr. Reuben Abati, said this in an interview with State House correspondents on Sunday in Abuja.

Abati said Akande's decision to reduce the issue of the recent abduction of schoolgirls in Chibok to partisan politics was irresponsible.

He said contrary to the APC chief's claim, Nigeria was not on auto pilot because there is a President who is doing his best to make the country safe for all.

He said, 'First, we consider it most unfortunate that the chairman of the APC will use the opportunity of â€‹the â€‹situation â€‹in the country â€‹namely the abduction of the â€‹â€‹girls â€‹of GSSC, Chibok â€‹to engage in partisan blackmail.

'The issue of national security should go beyond partisan politics. This is a very serious moment requiring seriousness. But to reduce all of that to partisan politics is in bad tasteâ€‹, â€‹irresponsibleâ€‹. â€‹

'One, Nigeria is not on auto pilot. There is a government in place, there is a President who is also the Commander-in-Chief of the Armed Forces. He is doing his very best to provide quality leadership and to reassure Nigerians that government stands ready always to defend their best interest.

'This administration has continually showed courage and commitment in the face of whatever challengeâ€‹sâ€‹ that may arise.'

Abati said Akande's attempt to portray the President as doing nothing was tantamount to dishonesty.

He said it would be wrong to say that the country is on auto pilot in the face of all the achievements of the present administration.