Double my pay or no deal, Omeruo tells Chelsea 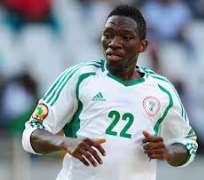 The centre-back impressed during his stint at the Riverside Stadium, with Boro boss Aitor Karanka already keen to bring him back for next season.

But the 21-year-old needs to commit to a new contract with the Blues, with his current deal expiring in 12 months.

The Nigeria international – who is set to feature in this summer's World Cup – has already rejected an initial offer due to it being too low, according to representative Chika Akujobi.

“We want them to double the offer, but they said they have a new policy for young players who have yet to break into their first-team and this ensures they do not go overboard with their offers,” he said.

“But Kenneth has already proved himself in the English Championship which is even more forceful and physical than the English Premier League, which is more about tactics.

“Chelsea have to come up and they have to do so soon, before the club go on summer holidays.”