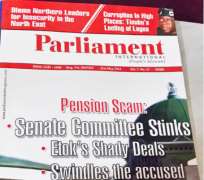 The last may not have been heard on the bribery scandal that has reduced the hallowed chambers of the Nigerian Senate, as fresh indications have revealed that Senator Aloysius Etok, Chairman of the Senate Probe Committee and members of the committee are yet to clear themselves from the financial saga.

A fresh report in the Parliament International, in its May 2014 edition, alleges that out of the bribery money of N3bn, Senator Etok who represents Akwa Ibom North West, “outsmarted his committee members and declared only N500m, claiming that that was what they were given by the accused persons”.

One of the pension fund accused person, Dr Sani Shaibu had in an earlier interview with the same magazine, alleged that the “N3bn bribes given to the committee was contributed by all the accused persons, which means that each one of them contributed N500m.”

The financial impropriety of the probe committee led by Dr Etok, has been widely condemned and blamed for impugning on the integrity of the Nigerian Senate.

Aloy Etok who is the Chairman of the senate Committee on Establishment, has after two years, been unable to explain why his probe committee chose to suspend the Pension Task Force set up by the executive and which had membership drawn from different security and anti-graft agencies and headed by Abdulrasheed Maina.

It is to be recalled that hardly the Task Force concluded its assignment than it was suspended by the Senate Committee on Pension Reforms headed by Senator Etok.

It would also be recalled that Etok's kinsmen had recently in a town hall meeting in his federal constituency questioned his honesty and described him as a disgrace to his people.

Emmanuel Edet
Nsit Street, Uyo
Akwa Ibom State
(No Man Has The Right To Rule Over Another,
Without That Person's Consent)