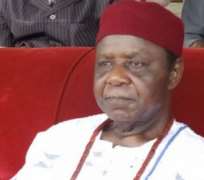 At the funeral mass presided over by Rev. Michael Elue, the Bishop of Isele Uku diocese, Jonathan eulogized Uwechue who died on March 13 in Abuja, saying that he was not only a pioneer staff of the nation's foreign service, he came to epitomize the finest ideals of international diplomacy and uncommon commitment to dedicated service to the fatherland.

The President added: 'The late diplomat served the nation at the highest levels in various capacities and remain steadfast in the defence of the unity, peace and stability of Nigeria.'

Curiously absent at the funeral mass were the five serving governors of the South East geo-political zone, an area he served during his time as the President General of the apex Igbo socio-cultural organizations.

In his oration, Anyaoku traced the relationship between them to their days at the University College, Ibadan 59 years ago, describing the deceased ambassador as an uncommon pan-Africanist who believed in the truth of a united Africa for development to the extent that he appropriately named his sprawling house at Ogwashi Uku after the continent.

He lionized him as a true Nigerian patriot, who loved Igbo people and Nigerians with equal passion, stressing that his love for democracy made him join the National Democratic Coalition (NADECO) during the bad old days of the military junta under Gen. Sani Abacha.

The former Commonwealth scribe said: 'He was actively involved in the promotion of friendship and solidarity during his tenure as the President General of Ohanaeze Ndigbo. I am confident that his legacy of a worthy character and devotion to public service will endure to the benefit of future generation.'

Uduaghan said that Uwechue was deeply involved in conflict resolution in several African countries, advising that the country needed to tap into the experience of people like him especially now that the nation was facing Boko Haram insurgency in the north.

In his homily, Rev. Elue remarked that he was not only a friend but a king, gentle and humble benefactor, who did so much for humanity. (The Guardian)