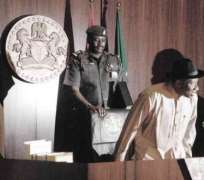 The shadowy group of members in the House of Representatives, who backed the transfer of power from ailing President Umaru Yar'Adua to Vice President Goodluck Jonathan some weeks ago, have finally shed the toga of secrecy.

20 members of the group, Nigeria First Forum (NFF) led by Jigawa State lawmaker, Abba Adamu, yesterday met journalists for the first time since the president's health became critical, leading to the alignment of pressure organisations which asked him to step down.

At the unveiling of the group yesterday, Mr. Adamu, who chairs the group, was accompanied by some of the members.

Mr. Adamu said the membership of the group is in excess of 140 in the House of Representatives. He confirmed that his group was responsible for the nameless protest letter sent to Mr. Jonathan in the thick of the controversies. The letter was reportedly signed by many lawmakers whose identities were not made available to the media.

A shot in the arm
However, the fact that the group came out of the shadows a day after Mr. Jonathan sacked the cabinet he inherited from Mr. Yar'Adua, thereby asserting greater authority over the pro-Yar'Adua group, came up at the meeting with journalists. In a reply to why they had to wait this long to reveal their identities, Mr. Melaye defended their stand. “That was our strategy and it worked for us,” he said.

Another member of the group added that, beyond the strategy, many lawmakers had to be wary of the counter plots of the House leadership led by the Speaker, Dimeji Bankole.

“Some of the people we got that time even gave us fake signatures so that they could turn around and back another group if it backfires,” said the lawmaker who asked not to be named. “Look around today, the people you see here are men of their own stand.”

Mr. West-Idahosa, a three-term member of the House, also responded to the question about prospects of the group pushing for the outright impeachment of Mr. Yar'Adua. He said they will always stand for the rule of law and respect for the constitution. “Whatever we do will be guided by the constitution and nothing more,” he said.

Full support
The group praised Mr. Jonathan's 'courage' in replacing the National Security Adviser and overhauling the cabinet. It said the members are prepared to give the acting president every support to succeed and urged him to offer priority attention to the power sector, electoral reform, and the anti-corruption crusade.

“Our dear nation Nigeria will particularly be indebted to the acting president if he will give unqualified priority to the perennial problem of power, which has so much impeded our economic progress,” the group said in a statement read by Mr. Adamu. “In addition to the foregoing, we enjoin the Acting President to expose and fight relentlessly against corruption in all its ramifications.”

During the days when discussions on the president's health were held in closed sessions and largely scaled down by the leadership of both chambers, the few members who spoke against it did so in strict anonymity, except for a few like Patrick Obahiagbon from Edo State, who held the first open press briefing to speak on the crisis.

The pressure later grew as many groups, such as the Save Nigeria Group led by Nobel laureate Wole Soyinka, and Tunde Bakare, pastor of the Latter Rain Church, staged open protests twice, pushing for full powers for Mr. Jonathan.

Only a few lawmakers openly criticised the president's continued stay in office, in spite of his deteriorating health.