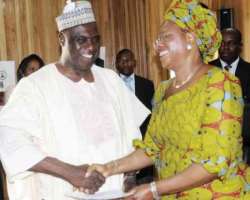 Nigerians have called on Goodluck Jonathan, the Acting President, to choose hardworking and patriotic men and women for his new cabinet.

The Conference of Nigeria Political Parties, in a statement, challenged Mr. Jonathan to nominate only competent and transparent Nigerians, regardless of party affiliation, religion or creed.

The Nigeria Bar Association also admonished the Acting President to “do away with political jobbers and all characters with no visible means of livelihood other than politics. Only those who are technically eligible must be nominated for the approval of the National Assembly. Any member of the defunct band whose name may reappear on the list must owe this singular opportunity to his or her exceptional qualification and nothing else. None of them must be brought back on the ground of sentiments,” Rotimi Akeredolu, its president, said in a statement yesterday.

The Action Congress (AC) also in a statement, warns Mr. Jonathan not to succumb to the dictates of the Governors' Forum in reconstituting his cabinet. It asked him not to accommodate 'special interests' such as the Governors' Forum to nominate candidates for ministerial posts, noting that “he would get ministers whose loyalty will be to the governors, rather than to the country first, and then of course to the Acting President.”

The party also stated that the key areas in which the Acting President can lift the veil of despondency across the country are electoral reform, power and energy, as well as the Niger Delta, noting that the electoral reform is the most important, because “it will help set the stage for the emergence of a truly-elected government, which will act in the interest of the people, rather than a cabal of riggers.”

Good intention
However, Dora Akunyili, the former Minister of Information and Communications, has said that Acting President Goodluck Jonathan acted in good faith by dissolving the nation's cabinet.

Mrs. Akunyili, who spoke during her handover ceremony yesterday in Abuja, said the action was necessary to douse tension and cool the heated polity.

Asked what she intends to do with her life after handover, the former minister said that losing her job will afford her the opportunity to rest, and consider other options to move forward in life.

“I will take the opportunity to rest, reflect on the past, and weigh my options for the future,” she stated, adding that she has enjoyed the best support from Nigerians during her tenure as the head of one of the key ministries in Nigeria where she served for 15 months.

Speaking in an emotion-laden voice, Mrs. Akunyili said, “It is with mixed feelings that I address you today for the last time as the Minister of Information and Communications. I feel happy and grateful for the opportunity given me to serve as minister in this great ministry. The day I took over I said this ministry is the soul and image of Nigeria. Therefore, it was about the most important ministries in Nigeria for one year and three months.

She lauded the steps taken by her administration to attract the interest and support of the World Bank to the Nigerian entertainment industry for music and Nollywood.

“The World Bank is providing a grant of 20 million dollars(3 billion naira) to support the industry. This is fundamental to our efforts to move the industry to the next level.”