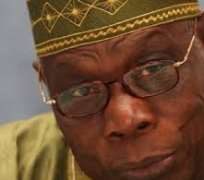 An Abuja High Court yesterday ordered former President Olusegun Obasanjo to file a statement of defence in a libel suit brought against him by a chieftain of the Peoples Democratic Party (PDP), Mr. Buruji Kashamu.

Justice Velentine Ashi gave the order when counsel to Obasanjo, Mr. Ojugwu Akana, made oral application for an extension of time to file the statement.

According to the News Agency of Nigeria (NAN), Justice Ashi also awarded N20,000 cost against Obasanjo and subsequently adjourned the case until June 10 for definite hearing.

Earlier, Akana told the court that he filed a motion dated May 5 seeking an order of the court to grant extension of time to file their statement of defence.

He also submitted that the extension of time would enable them to file the statement of their witness on oath.

'My lord, this extension will enable us to get a copy of the judgment of Court of Appeal in Illinois, the United States of America.

'My lord, this judgment is vital in the defence of our case because a high court in Illinois had earlier ruled that Kashamu has a case to answer.

'He appealed the ruling because he was not satisfied with the decision of the court in Illinois,' he said.

Akana objected to granting any cost to Kashamu, as this was the first time the case was being adjourned at the instance of the defendant.

Kashamu had filed the suit in March over a letter Obasanjo allegedly wrote to President Goodluck Jonathan which referred to him (Kashamu) as 'a criminal and fugitive wanted in the United States.''

Kashamu is asking the court to award him N200million as the cost of damages he suffered due to the alleged libel.

Counsel to Kashamu, Mr. Kenneth Omoruan, did not object to the oral application.

Omoruan, however, prayed the court for N200,000 cost that the adjournment might cause him.