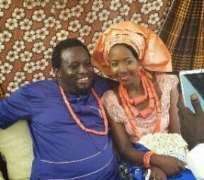 The comedian got married to his Radio/TV journalist girlfriend, Milliscent Adanma Maduagwu who is a presenter with Nigeriainfo, in Port Harcourt, Rivers State.

Other guests in attendance were On Air Personalities (OAP) from Cool FM, Wazobia FM and NigeriaInfo from the Lagos and Port Harcourt offices, as well as families and friends of the couple.