Governor Kashim Shettima: Give Your People Guns To Defend themselves 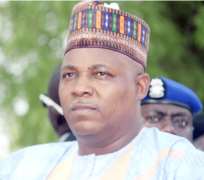 We are writing you openly, that the people see and know you were advised openly. You have waited and watched your people being picked off like hens in a pen for the past four years. You have relied on and waited for the State security services to protect life and industry in your state of four years, but your people are dying now even faster than before.

Within the last three days, over 600 of the citizens of your state were slaughtered cheaply. They died at work, at the market, while bathing their children, in the farm. This is just one more week of death in your state. Your state is in global news because 234 girls were kidnapped in your state; these we know add to the hundreds who have been kidnapped, and abused till pregnancy or death by Boko Haram over the past four years.

These girls, we know add to the more who have been kidnapped after April 15th and the boys of your state, and farmers of tomorrow who have likewise been kidnapped and forced at knife-point to become Boko Haram's new recruits all through the four years.

Dear Governor Kashim Shettima, do you know that what has happened in Borno would never happen in any other state in Nigeria without the governor giving his people guns and a course in training so they can defend themselves? Your people are great warriors and Patriots. Let them defend themselves.

Do you know that with the massacres of up to 40,000 of your citizens, with hundreds of thousands displaced, with the losses to your agricultural production, to the mental state of your people and to the future of your great region and indeed nation, there is no other country or state in the world that would have accepted this vulnerability and left its people at the sheer mercy of such marauding terrorists operating in impunity without giving them real rifles and a fair chance to fight off the terrorists and protect themselves and their loved ones? Have you looked at Algeria and what they did when they were faced by an identical situation?

http://ENDS.ng [Every Nigerian Do Something]