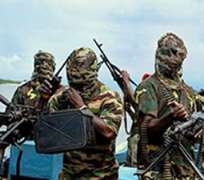 Foreign investors in the country are so far unfazed by the wave of killings and kidnappings by Boko Haram militants that have rocked the country in recent weeks and sparked international outrage.

According to Bloomberg, delegates arriving at the World Economic Forum in Abuja on Wednesday were still focused on tapping the continent's oil reserves in the south and a growing middle class.

'It's grabbing the attention of everybody globally, but it doesn't give investors in Africa a surprise,' Teresa Coelho, a money manager at BPI Gestao de Activos SA, an owner of Nigerian stocks, said by telephone from Lisbon. 'It doesn't change the investment case.'

Executives from Heineken to UBS are arriving in Abuja as the Federal Government faces one of the worst rounds of violence in the Federal Capital Territory in recent history.

More than 90 people have been killed in separate bomb attacks in the past month just miles from where the conference is taking place.

Gunmen had on April 14 invaded the Government Girls Secondary School in Chibok in Borno State and abducted over 200 students.

The Head, Emerging-Market, Aberdeen Asset Management, which oversees about $12bn in emerging-market and Nigerian debt, Mr. Kevin Daly, said the Boko Haram incidents had been confined mainly to the north.

He added that as long as that remained the case, money would keep flowing into the country.

'If this were to spread to other parts of Abuja and to Lagos, which is obviously getting closer to the oil infrastructure, that's where you start to have some potential impact on investor sentiment,' Daly said in a telephone interview from London.

Companies such as Procter & Gamble and MTN Group have invested in the country to tap opportunities in Africa's biggest economy which the Federal Government has said will expand by 6.75 per cent this year.

Foreign Direct Investment rose 28 per cent to $21.3bn last year, and stood at $2.5bn in the first two months of 2014, according to the statistics office.

An economist at FCMB Group Plc in London, Mr. Alan Cameron, in an e-mailed response to Bloomberg questions, said, 'Recent bomb attacks in Abuja will strengthen existing concerns among investors about the state of security in Nigeria ahead of elections, even if they do not undermine the long-term investment case for Nigeria.'

The naira has weakened 0.8 per cent against the dollar since the start of the year to trade at N161.55 in Lagos on Wednesday.

Yields on Nigerian Eurobonds, which is due July 2023, dropped 36 basis points in 2014 to 5.56 per cent. The Nigerian Stock Exchange All-Share Index retreated 6.9 per cent this year, the worst in Africa among 93 global indexes tracked by Bloomberg.

The Minister of Finance, Dr. Ngozi Okonjo-Iweala, had on Monday said that investors would look beyond the Abuja bombings to the 'underlying strength of this economy in the long term.'

'The tragic incident in Abuja underlines the tension, but our underlying investment thesis remains broadly the same and is based on the fundamental creditworthiness of the country,' said John Bates, an emerging markets analyst at PineBridge Investments, which has $71.4bn in assets under management, including in Nigerian shares, and government and corporate bonds.