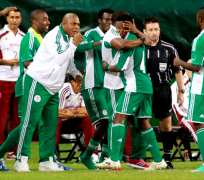 The Rivers State Chapter of the All Progressives Congress (APC) has thrown its weight behind the provisional list of players for the Brazil 2014 World Cup drawn up by Coach Stephen Keshi and released by the Nigeria Football Federation (NFF).

“This would have been a perfect list if not for the exclusion of in-form striker Ikechukwu Uche, but we respect the position of Keshi, who insists that Uche would divide the team if invited. We believe that the coach knows better. It is better to sacrifice one player than to jeopardise the interest of the entire team and the entire country,” Rivers APC Chairman, Dr. Davies Ibiamu Ikanya, said in a statement issued in Port Harcourt.

The party commended Keshi and his assistants for pardoning repentant Osaze Odemwingie, who has rediscovered his scoring form in the very competitive English Premiership.

“With the inclusion of Osaze and other key players we are convinced that if the Keshi and his assistants select the right players for each match when the World Cup kicks off in Brazil in June, we can become the first African team to reach the semi-final of the World Cup,” Rivers APC said.

It appealed to all Nigerians to pray for the success of the Super Eagles during the World Cup “since football is not only a unifying factor among Nigeria but also the only thing that gives the masses joy in these days of suffocating hardship arising from the misrule of the visionless PDP-led government of President Goodluck Jonathan, whose only bright spot has been in the sports sector”.