Witchcraft And 'Bad Medicine' In Ghana 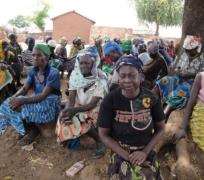 'My grandmother is in Gnani', Ruka, 22, told me as we made our way to Yendi on a Metro Mass Bus. It was an early morning bus. I was travelling to Yendi to persuade police and prison officials to allow me have a chat with a young man, Sufu, who murdered the step mother some years ago. Sufu is currently on remand at Yendi prison. He stabbed his stepmother to death one evening after a local soothsayer told him that the stepmother was witch hunting him. The case is still going on at the Circuit court in Yendi.

I found myself sitting together with Ruka in the bus to Yendi by chance. There was some problem with my seat number. My seat number was 45. After purchasing the ticket, I was not in a hurry to board the bus because I believed I had a ticket with a seat number clearly written on it. So there won't be any problem. But I was dead wrong.

As the bus was about to leave, I got in, and lo and behold somebody, a lady, was occupying my seat. I calmly(though worriedly) asked to know her seat number and it was 35. I showed her my seat number to let her know that she was sitting on the wrong place. But she behaved as if she did not understand what I was saying.

I checked and found out that there was no seat for number 35 in the Bus. It was an open space. The seat must have spoilt but the management had not replaced it.

The lady must have noticed this when she boarded and decided to occupy my seat. When I drew her attention to my seat number for the second time, she literally ignored me murmuring something in Dagbani. As if she was telling me 'Go and find somewhere to sit. I am not standing up from here'.

I needed to act very fast otherwise I would stand throughout the journey from Tamale to Yendi.The journey takes about 2 hours

I quickly went to the lady who issued me the ticket and complained. She looked at me as if she already knew about the problem. She just asked for me ticket. I gave it to her. She cancelled number 45 and wrote number 2 on it and handed the ticket back to me. This time I did not delay, I went into the bus and occupied my seat right away.

This was how I came to seat with Ruka. Ruka is in a Senior High School in one of the communities under Mion district. She came to see a family member in Tamale and was returning to her village.

Shortly after we left Tamale I introduced myself to her. I told her that I was researching the topic of witchcraft, sotali(or sounya-witch) as the term is known in Dagbani. As usual, she smiled and gave me that curious glance I often get when I introduce my research topic to people in Ghana. A glance I have interpreted to mean, 'Why is this guy interested in this topic- of all topics?'

I asked her to explain to me what she understood by the term, Sounya. Ruka said ''Sounya is a person who can poison somebody, a person who kills or can kill people using 'juju'''. I asked her to explain the meaning of 'juju'. And according to her, it is a sounya who knows the 'juju' she uses to kill. Sounya can be a man or woman, a young or old person. When it is a man, he is called Bukpaha. A female person is called Sounya. It was in the course of this explanation that Ruka told me that the grandmother was accused of witchcraft and later taken to Gnani- one of the villages hosting a 'witch' camp in the region.

Upon further inquiry, Ruka explained that the woman was not her direct grand mother, but a sister to her grandmother. Ruka's own grand mother died during the Dagomba-Konkomba war in 1994. She was blind and could not flee when some Kokomba militants invaded her village. They locked her up inside the hut and set it ablaze. Ruka was living with her grand mother's sister till she was accused of witchcraft and banished to Gnani.

'What happened' I inquired from her. She explained that one of the Uncles living in Accra was sick and called to inform the family in Yendi. He had a partial stroke. The family prepared some herbal concoctions, known locally as Dagbani tim and sent it to him in Accra. But after some time he called to say that the sickness was getting worse; that the 'medicine' they sent him was not good. Ruka said the auntie informed him that it was the grandmother who spoilt the 'medicine'. The grandmother was branded a witch. She was accused of puttingso-tim, as witchcraft substance is called, in the 'medicine'.

According to Ruka, the auntie never explained to the family how the grandmother spoilt the 'medicine'. The grandmother was subsequently taken to Gnani where she is currently staying. For many people in contemporary Ghana, witchcraft is an idiom for the explanation of bad medicine, bad death and bad dreams.

Disclaimer: "The views/contents expressed in this article are the sole responsibility of Leo Igwe and do not necessarily reflect those of The Nigerian Voice. The Nigerian Voice will not be responsible or liable for any inaccurate or incorrect statements contained in this article."
Articles by Leo Igwe
14-4-2017  Meningitis Outbreak: Questioning The Existence And Potency Of Allah6-4-2017  Invisibility Of Atheism: Exploring The Phenomenon Of Worldly Religion In Africa2-1-2017  Gender Equality And Misogynistic Islam In Nigeria13-11-2016  Building Mosques And Economic Recession In Nigeria6-11-2016  Islam: No Justice For Victims Of Blasphemy Killings In Nigeria?More...