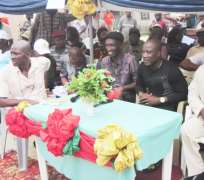 In a glaring demonstration of unflinching support and solidarity for President Goodluck Jonathan's re-election, renowned socio-cultural group of the Kalabaris, Kengema Unity forum, led by the, Founder/Leader, Amb. General Sobomabo Jackrich engaged in a three day extensive grassroot mobilization and sensitization of electorates across the thirteen (13) wards in Asari-Toru Local Government area of Rivers state from the 29th of April - 1st of May 2014.

Obviously like a resolute and tireless horse the KUF leader and his members were able to congregate with various individuals, party chieftains, strategic organizations, traditional rulers, titled chiefs, youths and women group including the opposition among others, carrying out the very important task of highlighting the good works of President Jonathan and convincing the people that he is the most reliable and effective individual worthy of re-election for the 2015 presidential race.

The KUF leader had reminded them how the President Goodluck Jonathan's transformation agenda has changed the landscape of Nigerian for the better wining over many admirers and repositioning the country. He also harped on the need to enthrone a Kalabari governor come 2015, saying the Kalabari people have played a pivotal role in the development of Rivers state..

Sobomabo Jackrich and his followers kick started the sensitization and enlightenment visits to five wards of the LGA on the first day. Ward one was the first visited on Tuesday, 29th of April 2014 where two aspiring councilors on the platform of Kengema Unity Forum were introduced to the people of the ward. Also introduced were two Chairmanship aspirants and House of Assembly aspirants amidst an elated crowd that turned out en masse to accord the delegation a rousing welcome and support. It was followed by a further five on the second day, 30th of April, before concluding with visits to the last three riverine communities outside the headquarters in Buguma on the 1st of May 2014.

The last day witnessed heavy downpour at ward 10 in Abalama community, however they were not to be deterred as the ex freedom fighter in the face of torrential rainfall walked on foot with his supporters across to the next community in Iddo where he continued his sensitization of electorates. The three day event was obviously electrifying, and every ward he visited witnessed monumental turn out and solidarity with the President, an indication and manifestation of, Amb. General Soboma Jackrich's grassroot popularity.

Speaking to an overwhelming crowd in one of the communities he said, “President Jonathan has shown a disciplined, focused commitment to the Nigeria project and possesses very noble and appealing qualities of patience, tolerance, understanding, empathy and an instinctive faith in the common man”, adding that his transformation agenda has changed the landscape of Nigerian for the better.

In ward 13 on the 1st of May from a community called Krakrama accessible only by boat, he arrived to the elated embrace of the chiefs and people of the area. The peace Ambassador had told the mammoth crowd that turned out that Jonathan has constitutional right to seek for a second term in office; maintaining that nobody has the right to deny him that.

In wards 12, 11 and 10 he said it has become imperative to engage in this wide mobilization within the 13 wards of ASALGA LGA to get key stakeholders to support the call for him to re-contest in order to consolidate on the good work he started through the transformation agenda. He said the President's impressive strides in leadership has consequently contributed in advancing the rating of the country to the pole position as the number one economy of the African continent, stressing that as a people from his region we cannot be seen as relenting in our support, hence the visit to strengthen the cause and attract more support base.

Jackrich who is also the Director General of Network for the Defense of Democracy and Good Governance, NDDGG while speaking to a large crowd in wards 8, 7 and 6 said President Jonathan has carried power with remarkable humility and candor, he said his total commitment to a free, fair and credible election portrays him as far from desperate and indeed a man of vision. Furthermore, the man also known as Egberipapa said the President has amassed an impressive array of world renowned success-conscious professionals who has contributed in no-small measure in making his administration a huge success.

It will be recalled that Kengema Unity Forum, KUF and the Network for the Defense of Democracy and Good Governance, NDDGG socio-cultural and democratic groups of the ex freedom fighter has continued to expend both human and material resources in its sustained sensitization and social mobilization for the re-election of President Goodluck Jonathan expected on February 2015. Jackrich has told the crowd in one of the wards that the belief in President Jonathan is stemmed from the fact that he is the most outstanding democrats and most experienced out of them all who knows the problems of Nigeria and has proffered solutions to a good number of them.