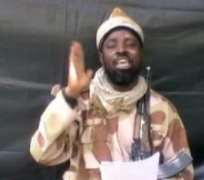 The Boko Haram sect has said it carried out the abduction of hundreds of schoolgirls in April.

'I abducted your girls,' Boko Haram leader Abubakar Shekau said in a video obtained by the AFP news agency.

Meanwhile, a woman who helped organise protests over the abduction has been detained, her fellow community leaders say.

Naomi Mutah took part in a meeting on Sunday called by the president's wife, Patience Jonathan. Shortly afterwards, she was taken to a police station.

A presidency source quoted by the Reuters news agency said Mutah had been detained for allegedly and falsely claiming to be the mother of one of the missing girls.

But one of her fellow protesters told Reuters Mutah was calling on the authorities to 'bring back our daughters' in the broader sense of 'daughters of Nigeria'.

'They are so clueless,' Lawan Abana said.
The girls were abducted on April 14 from their school in Chibok, in Borno State.

In another development, the dreaded sect has threatened to 'sell' the hundreds of schoolgirls it abducted three weeks ago.

Militant leader Abubakar Shekau sent a video obtained by the AFP news agency, in which he said for the first time that his group had taken the girls.

The Boko Haram insurgency has left thousands dead since 2009.

The girls were taken from their school in Chibok, in the northern state of Borno, on the night of April 14. BBC