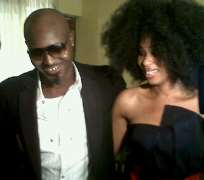 Enugu State, born ex-beauty queen and mother of two who started her musical career in 2001 when she released a single called Oluronbi which featured Nigerian Fuji star Pasuma Alabi Wonder.
Queen Chinyere Onokala, also known as kween and known for her popular hit song, Jebele Jebele has shown her husband a big gift from her heart.

She gave her husband Dotun Omotoye of Rumours Nite Club, a 2009 Pontiac Solstice sports car as birthday present yesterday May 3, 2014.

In addition to being a singer and songwriter, Kween is also an actress and has previously featured in several Nollywood movies.