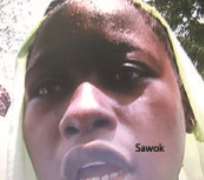 Following the Boko Haram struck over 2 weeks ago, abducting over 270 school girls in Chibok, Borno State, some were brave enough to escape. Punch caught up with two of them Sawok & Thabita Walse who gave their account of how they escaped..

Can you describe the attack on your school?

Sawok: We were in the hostel. One of the men dressed in military camouflage asked us where our dining hall was. From our hostels, they took us to the dining hall and from there, we were moved into the waiting vehicles and they headed towards Damboa town. The incident happened around 11pm.

Walse: It is a long story. They came to our school and deceived us into believing they were soldiers. They were dressed in military uniform and made us believe they were about rescuing us only for us to later find out that they were insurgents. When we discovered, it was already too late and there was little we could do.

At what point did you know they were not real soldiers but insurgents?

Sawok: They were shouting and rude. That was when it became clear to us that they were insurgents, then they started shooting and set our school on fire. They even shot the security men guarding the school.

How did you escape?

Sawok: I jumped out of the vehicle that looked like a truck.

Walse: Our vehicle developed a problem and they were forced to stop. I took the opportunity with some girls to run into a dark bush.

What gave you the courage to jump out of the vehicle?

Sawok: I have heard a lot about Boko Haram, the bad things they do and how they have killed many people in the state. I was afraid and I became desperate. I felt getting to their camp could be dangerous for me and it would be better if I escaped. That gave me the courage to jump out. I believed that I would only get injured since it was dark and they may not know how to look for me in the bush.

Did all the girls that escaped plan it?

Sawok: No, I believe the same thing was running through our minds. Immediately one of us jumped out, the rest of us just started following her.

Do you have any injury?

How do you feel about the others that were not able to escape?

Sawok: I would have loved all of us to escape. I can't celebrate my escape because some of my friends and classmates are still in the hands of the insurgents and I don't know what they are facing. It is my prayer that they should be freed.

Walse: I have no problem, I am okay and very strong physically. The only problem I have is that some of my friends are still held hostage by terrorists.