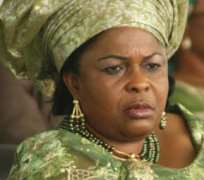 The wife of the President, Mrs. Patience Jonathan, on Friday night practically took over investigations into the case of over 200 girls, who were abducted from Government Secondary School, Chibok, Borno State on April 15.

Just as her husband, President Goodluck Jonathan, was setting up a fact-finding committee on the matter, she presided over a five-hour marathon meeting of stakeholders that ended at about 11pm.

While announcing that the meeting would continue on Sunday (today) by 4pm, the President's wife summoned some individuals, which she believed would assist in unravelling the circumstances leading to the girls' abduction and their whereabouts.

Among those summoned were the Borno State Commissioner of Police, the state Commissioner for Education, the chairman of the local government, the divisional police officer in charge of Chibok, the wife of the village head, the school principal and the school gateman.

Others were: two teachers from the school, the chairman and secretary of the school's Parents Teachers Association, two house parents, two parents of the missing children, as well as two parents whose children had returned home.

Mrs. Jonathan said if the schoolgirls were not found by Sunday, she would not hesitate to lead women on a protest match to Maiduguri to demand for their whereabouts from the Borno State Governor, Kashim Shettima.

She also announced the composition of a committee saddled with the responsibility of ensuring that those she summoned would attend the Sunday meeting.

She said, 'Within three days, something will happen. We will get to the root of the matter. I don't come out and go back empty. I have come out and something must happen.

'I have been dealing with this secretly but you have taken me to the market square. There is no more hiding.'

Mrs. Jonathan said as the chief security officers of their states, state governors must be ready to take the heat for any act of insecurity in their domain.

She stated that during the administration of former President Olusegun Obasanjo, the former President could call her husband who was the Bayelsa State governor in the middle of the night once any news of kidnapping was reported.

'Governors are the security officers of their states. During Obasanjo's time, anytime a white man was kidnapped in Bayelsa State,  he would call the governor (Jonathan) at 2am and give him 24 hours to produce the kidnapped person.

'We now know who to ask for our children. We don't need to embark on demonstrations from state to state,' she said.