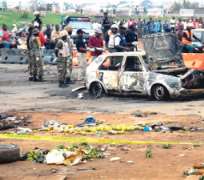 The death toll of the last Thursday's bomb explosion in Nyanya has increased by one at Asokoro District Hospital. It is now officially 20.

This was confirmed during a tour of the Hospitals by the Minister of State for Health, Dr. Khaliru Alhassan on Saturday in Abuja.

According to him, the hospitals were not lacking in anything.

He said, 'As you can see we have visited some facilities and you can see our health team attending to patients professionally and adequately. There is no single place that we went and found patients in need, they are all being adequately taken care of.

'As you can see, people are dressed and drugs are administered on them, so we have the capacity to deal with this unfortunate incident that happened. All the hospitals are responding to the situation properly.'

On whether he could quantify the amount of money that has been spent on the treatment of the patients Alhassan said, 'It is virtually impossible at the moment because it is an ongoing thing.

'You need to know that the first cases are still here, we cannot say now how much has been spent, but it is going to run into millions, unfortunately. Since the first instance, the Federal Government has directed the FCT to take care of the responsibility of medical, feeding and other expenses incurred by these innocent victims.

'We have been asking questions from the hospital authorities whether there are any challenges, and they all said no. The patients are being taken care of properly, receiving medications and are being fed.'

According to him, the government 'has been receiving very good response from our development partners; the Red Cross has donated a lot of medical equipment to the National Hospital, which has been distributed and I am sure other donors have also contributed to us.

'We therefore appeal to members of public to be cautious of their security, we should be our brothers' keepers and we should not take anything for granted and whatever we are not sure of, we should immediately report to the police. We should be more proactive in supporting the government in terms of being security conscious.' NAN