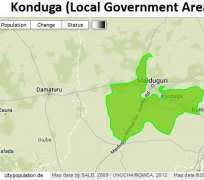 Armed Boko Haram terrorists invaded a village near Malari, 10 km west of Konduga town, Konduga local government of Borno State Friday night in an attempt to abduct the village women. According to locals who we talked to, the terrorists came around 11 pm at night expecting free access to the village, but the villagers came out and engaged the terrorists in a bold fight with their local weapons.

These “dane” guns are barely accurate and fire only two shots before requiring a time consuming re-load. Despite the handicap, with the local defense set-up, the Boko Haram invaders were held back till the Nigerian army came and engaged the bandits. Several terrorists were killed and the rest sent fleeing in a battle that went on till 5.30 am this morning.

Civilians and civil groups have been pressing for the urgent approval of the Federal government for Nigerian affected communities to have the right to bear arms—real machine guns—and for this to be conducted formally with military oversight and training.

This invaluable method of ending terror, which was utilized to check a similar senseless Boko Haram-like crises that plagued neighbouring Algeria in the 90's, has been proposed as being in the best interest of the communities and national security, and a necessary complement to the notably slow “rapid response” of Nigerian security services.

Relative calm has been restored to the Malari settlement, Konduga local government area. Konduga town, 25 km southeast of Maiduguri, Borno capital, has been the site of repeated Boko Haram terrorist attacks; the entire Konduga town has been wiped out by Boko Haram in the past. More than 62 people died in a massacre there this February.