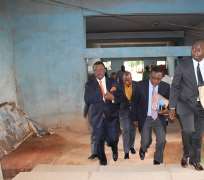 The Anambra State Governor, Chief Willie Obiano yesterday cleared all speculations over his alleged possession of more than one Voter's Card in the run up to the last gubernatorial elections in Anambra State from which he was overwhelmingly voted into office.

Appearing on the witness box at the Anambra State Election Petitions Tribunal holding in Awka, Chief Obiano told the Tribunal that contrary to the wild allegations about double registration, the only card he had was the one issued by the Independent National Electoral Commission (INEC) on September 3, 2013. The governor's testimony was in response to the petition brought before the Tribunal by Dr. Chike Obidigbo who was pleading to be recognized as the authentic candidate of the All Progressive Grand Alliance, APGA, in the gubernatorial race that produced the Obiano administration.

Under cross-examination by Oba Maduabuchi, Counsel to Dr. Obidigbo, Governor Obiano explained that he had a Voter Card which he used as a Lagos resident, but when he sought to stand election as Governor of Anambra State, he approached the INEC on 19h August 2013 to ascertain the procedure for the transfer of voter registration from Lagos to Anambra State to enable him vote at the nearest polling booth to his home in Aguleri.

According to him, 'the Electoral Officer requested that I send a letter to INEC which I did same day, and was advised to come in two days' time. I went back in the hope of picking my card but had to do my biometrics and was told pick my Card in Awka Anambra State.'

'On the appointed day, I went to the Office of the Resident Electoral Commissioner in Awka on 3rd September 2013 and got a New Voter card. That is the only card I have which I used throughout the elections.' Obiano emphasized.

Earlier, Counsel to INEC, Chief Ademoyega Awomolo, SAN confirmed that Governor Obiano had one voter's card and confirmed from the Governor that he had never worked in INEC in any capacity or had anything to do with the making of voter's registration. The INEC Counsel also confirmed that INEC had never accused Chief Willie Obiano over double registration or queried him as having more than one card.

Also when Counsel to the Petitioner, Oba Maduabuchi challenged the authenticity of the particulars of the voter's card; implying the existence of more than one voter's card and that the defence did not plead details of the card in question, the Governor defended himself, saying that he was never at any other Polling Station for the registration exercise other than the Electoral Commissioner's office.

On his part, the presiding Judge, Justice Ishaq Bello told Counsel to the Petitioner, Mr. Maduabuchi that the onus was on him to prove the existence of more than one voter card other than the one tendered by Chief Obiano, stressing that it was late in the day to try and argue about what the defence pleaded. He however advised the Counsel to avoid waste of time but rather come forward with his argument as part of the final address.

The Tribunal subsequently adjourned to Wednesday 7th May 2014 for final address by both parties.