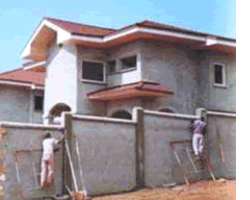 By PETER ANOSIKE
Thursday, March 18, 2010
Federal Housing Authority (FHA) has come up with an initiative which is likely to produce 100,000 housing units across the country.

The initiative is known as 2009-2013 Action plan.
According to the Managing director, Mr Tervor Gemade, under the initiative, those seeking houses from FHA are to form cooperatives, while the authority would provide the necessary expertise to assist them to build houses of their own.

He said that through this method, the authority plans to deliver 100,000 housing units across the country in the next three years.

According to him, to make this dream a reality, FHA has acquired land in all the geo-political zones in the country.

He said that the initiative was developed by the present management and that since it came into office, it has registered many housing cooperative across the country for the project to take off.

According to him, the initiative was borne by the fact that most of its clients are low income earners without the wherewithal to build their own houses.

'In a bid to open a window to these low income earners, FHA, has come up with the new imitative as a delivery model. The authority will provide the necessary expertise to assist members of the cooperative to build houses of their own at their own pace. Under this action plan, it is expected that a total of 100,000 housing units will be delivered through our cooperative housing scheme within the next three years.'

He also said that they are exploring new technologies for faster delivery of stronger and better homes, adding that they would not go far if they continue to depend on the traditional system of housing delivery.

The FHA boss stated that the authority has been re-engineered and that it is now set to make the final push towards reducing the nation's housing deficit.

Contributing, the chairman FHA board, Mrs. Chidi Onyemelukwe said that since the current board and management came into office, the operation of the authority has been reviewed with a view to strengthen it and turn it into a world class organization. According to her the authority's modes of doing things were also reviewed to ensure that clients get the best service. The FHA chairman said that the assurance she is giving to Nigerians is that it no longer be business as usual at the authority.