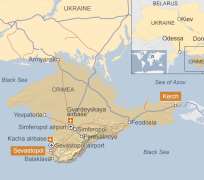 Pro-Russian activists have stormed the prosecutors’s office in Ukraine’s separatist-held city of Donetsk, hurling rocks and Molotov cocktails as the uprising against the interim government in Kiev rages ahead of the May 11 referendum on secession.

Several of the out-numbered police officers were injured in Thursday’s clashes and, in some cases, severely beaten as the separatists stripped them of their weapons and shields.

“The prosecutor’s office was issuing criminal orders from Kiev against its own people, charging them with separatism and other fake crimes,” one protester, a 43-year-old man from Donetsk who gave his name as Igor, told Reuters news agency.

Rebels quickly took control of the building after mounting a second assault from the back, hoisting the Russian flag, barricading the front door and burning Ukrainian symbols in the street.

The riot police responded with stun grenades, tear gas and rubber bullets, injuring some rebels, but were quickly overpowered.

There was no visible sign of live ammunition being used by either side.

Once inside the building, which was empty for the May 1 public holiday, dozens of rebels, dressed in civilian clothes and wearing balaclavas, tore down official photos and began a search for weapons.

Donetsk, the main city of what separatists call their “Donetsk Republic”, was seized from Kiev’s control on April 6.

The Western-backed government in Kiev has admitted it has effectively lost control of the increasingly chaotic east, with Oleksandr Turchynov, Ukraine’s interim president, saying authorities were “helpless” to prevent rebels over-running towns.

On Thursday, Turchynov announced that military conscription would come into effect immediately “to bolster Ukraine’s defence capabilities in connection with aggression from the Russian Federation.”

More than a dozen towns and cities in eastern Ukraine are already in the grip of the separatists, who have vowed to hold a referendum on May 11 on independence from Kiev and closer ties with Russia.

The West believes Russia’s President Vladimir Putin is pulling the strings in the uprising, dismissing his denials that Russian forces are covertly leading rebel assaults.

This week, the US, the EU, Japan and Canada imposed sanctions on powerful Russian individuals and firms as punishment for what is seen as continuing interference by Moscow.

Russia has reacted angrily, but said it would not retaliate in kind at this time.

The International Monetary Fund has, meanwhile, thrown a $17bn lifeline to Ukraine, with $3.2bn of that available immediately.