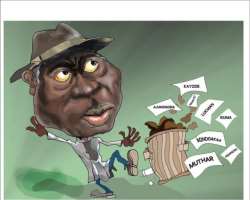 This is coming 22 days after ailing President Umaru Yar'Adua returned to the country under cover of darkness.

Before this, Mr. Jonathan had on February 10 made a minor cabinet reshuffle. The former Attorney General and Minister of Justice, Michael Aondoakaa, was moved to the special duties ministry, while Adetokunbo Kayode was moved from labour to the ministry of justice.

Writing on the wall
Earlier yesterday, at about a quarter to 10am, the hall where the council of ministers usually meet was half empty, with most of them standing in small groups talking and laughing loudly. However, at exactly 10am when the remaining ministers thronged into the hall, they exchanged pleasantries as if for the last time.

The meeting finally started at about 10minutes past 10am, with the arrival of the acting president, and lasted till after 1pm when they went on break. They reconvened at about 2:30pm and finally closed at past 5pm.

The first inkling of what might have transpired in the council chambers showed on the long faces of some of the ministers as they trooped out. The former minister of labour, Ibrahim Kazaure, when asked about the outcome of the meeting, replied 'I used to be the Labour Minister.' This was the first give away of what had transpired inside the hall.

The former minister of information and communications, Dora Akunyili, briefed journalists without any of her counterparts, as is the custom. She simply announced: 'the acting president, Goodluck Jonathan, has dissolved the Federal Executive Council.'

Behind the scenes
Since Mr. Jonathan took charge as acting president, there have been behind-the-scenes moves against him. A few of the former ministers were known to have worked to undermine his authority and make sure he did not function well.

A source close to Aso Rock confirmed that some of the ministers may not be reappointed. Some of those listed are Abba Ruma, the erstwhile minister of agriculture and water resources. He hails from Katsina and is known to be a close confidant of the Yar'Adua family. Adamu Aliero, former minister of the Federal Capital Territory, is another one that might not be reappointed. He is known to have been a powerful fixture in the Yar'Adua presidency.

The former minister of petroleum resources, Rilwan Lukman, is another man that may not make it back. This is based not only on his age, but also on the fact that he was one of the ministers who seemed to have defied Mr. Jonathan's order to ministers not to travel. He had gone ahead to leave for Vienna, Austria, although he later denied that he defied the ban on travelling.