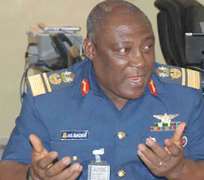 Nigeria's Chief of Defence Staff, Air Vice Marshal Alex Badeh admitted Wednesday, at the defence headquarters while hosting the National Oil Spill Detection and Response Agency in Abuja; that the army was not going to Boko Haram hide-outs.

In his explanation as relayed by the Punch, Vice Marshal Alex Badeh said, if they went with their armory, they will kill, or the girls will get killed. Badeh described Boko Haram killings as “madness,” and recommended prayers.

The posers:
1. What strategy are we as a nation going to use since the army has decided it cannot go to Boko Haram camps?

2. Does this mean, the only option left is that Nigeria will negotiate and pay the terrorists more money, to free the girls and with which to ultimately purchase more ammunition to continue their unending reign of terror?

3. Does Nigeria officially negotiate with and pay terrorists?

4. Is the approach of global, a.k.a., developed societies anything Nigeria endeavors to emulate? If so, have the army surrounded the camps where they will “not attack,” while they engage the terrorists in talks to free their prisoners, or the terrorists are free to move from camp to camp and to town to perpetuate more savagery? Is surrounding terrorists not standard procedure?

5. Has/have the army always known these hide-outs, before the recent abduction of 234 girls? If so, is it based on the same excuse—of previous abductees being with the terrorists—that the army never engaged the terrorists in the camps prior to the Chibok larger abduction?

6. Does the army have enough men to surround the terrorist hide-outs, and will it not be urgently helpful for the army to kit civilian vigilantes to assist in surrounding all terrorist hide-outs while “negotiations” and possible Entebbe raids are carried out and plotted?

7. Other than prayers for this killing “madness” as the army Chief put it, what is the army's immediate and long-term strategy to check and end terror?

8. Has the Nigerian army studied the Algerian model, of training and arming “Patriots,” trusted civilian defense militia in all at-risk neighborhoods and villages; which Algeria used to address its similar “Black Decade” terror crises of the 90's?

9. Is the arrest and prosecution of terror sponsors, including, but not limited to those listed on the Abba Moro White paper report of 2012, on the President and National Security Adviser, Dasuki's desk, part of the plans to be activated to permanently discourage and arrest the nationwide terror crises?

10. Is there any top security officer up to the Executive leadership and Presidency considering retirement or facing indictment in acknowledgment of the gross failures of the current administration in checking the deadly terror crises; as was observed to have occurred in South Korea, or Nigeria only emulates government official and cabal wealth bringing ventures from “developed” nations but does not emulate the methods of address, retribution and impeachment that these nations practice and that go hand-in-hand with the developmental and western democratic practices that serve political and military interests?

And finally: Is the Boko Haram threat too big and complex for you to handle? When are you going to harness the collective power of the millions of Nigerians on standby to help brain-storm and actively participate in the search and rescue abductees, and eliminate all terrorists mission?

I humbly pose these questions to the Chief of defense staff and all Nigerians.