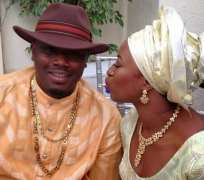 Nigerian singer, Sidney Onoriode Esiri, popularly known as Dr Sid, whose fiancée Simi Osomo, graduated from Law school in November 2013, has finally declared his intention to tie the knot later in the year.

The Nigerian entertainment industry has lately been abuzz with celebrities getting married to their sweethearts. Last weekend, Tiwa Savage and her husband, Tunji 'Tee Billz' Balogun held their wedding in Dubai.

At the ceremony, Tiwa's co-Mavin Records mate, Dr Sid, dropped a bombshell. The 'Surulere' crooner announced that his wedding would come up in July. His announcement was hailed by his colleagues who are eagerly waiting for the day to come.