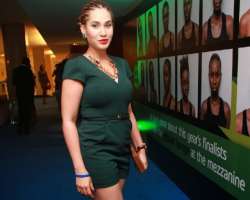 Recall that Caroline who has not been having it rosy, earlier in the year we gathered that her husband Musa Danjuma, was planning to get married to Popular lawmaker, Nnena Ijeoma, who happens to be the daughter of Justice Rosemary Ukeje, the retired Chief Judge of the Federal High Court.

The gist is, she has a son who is the center of her world and findings made by The ELITES revealed that the father of Ukeje's son is Musa Danjuma, the younger brother of General Theophilus Danjuma.

Well, Caroline who already has two cute boys, is said to already be showing as she's months gone into the pregnancy.