WHY I WANT TO SUCCEED DANIEL, BY HON AMUSAN 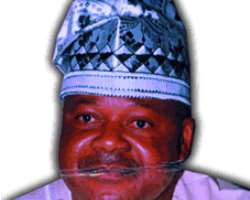 Why I want to succeed Daniel, by Hon Amusan
By Remi Adefulu
Thursday, March 18, 2010
Hon. Kayode Amusan represents Abeokuta North Federal Constituency in the House of Representatives. In this interview, Amusan, who is eyeing the Ogun State governorship seat in 2011, explains the reasons behind the recent National Assembly resolution making Dr Goodluck Jonathan, Acting President.

According to the lawmaker, who is also House Committee Chairman on Housing and Habitat, this was the ideal thing to do in view of the nation's complex nature. He also speaks on his ambition, INEC and 2011, post-amnesty programme, the national seven-point agenda, his agenda for Ogun State and more.

Excerpts:
Challenges before Jonathan
You would agree with me that the emergence of Dr. Jonathan was an outcome of a serious political engagement and permutation that brought a political solution to the problem that President Yar'Adua's departure and inability to forward a letter to that effect generated at that particular point in time.

The fact that the challenge was rearing its head for the first time in our political history prompted several mixed responses, and it invariably elicited new dimensions of thinking and political detour especially in an emerging democracy like ours. This was why the resolution of the National Assembly was more of political solution than constitutional.

The political solution became expedient in the light of the heterogeneous composition of the country which often times taints and trivialises genuine national concern, and you would agree with me that the intervention of the National Assembly undoubtedly doused the tension and panic that had enveloped the entire political atmosphere in the country.

INEC and early elections
This has remained a nagging issue in our political development, that has consistently dominated our national discourse in recent times. And what has united both the civil society groups and the political class is the urgent need for a credible and predictable electoral reforms that will bring the desired transparency and acceptability in our elections.

It was one issue that this administration gave a lot of attention when it inaugurated the Uwais Committee which was given the mandate of evolving credible electoral reforms. In furtherance of this intention, an executive bill was forwarded to the National Assembly which was based substantially on the recommendation of this committee. One of the recommendations that people have canvassed for is the need to have an early election which will leave enough room or period for litigation to be concluded before the swearing in of any elected candidate. These, and few other recommendations are expected to be included in the new Electoral Acts before the next elections.

Amnesty programme
Discerning minds will agree with me that the Federal Government has achieved a tremendous feat in this direction in being able to restore peace and tranquility to the Niger Delta through the institution of the amnesty programme which saw to the complete disarmament of the militants and the peaceful engagement of various parties involved in bringing peace to the area.

There is no doubt as to the successes recorded in this direction. We all knew how restive and ungovernable the area was, and which inevitably elevated criminality to a state art, and turned the whole place into a haven of kidnapping and ransom payment.

Jonathan on election matters
The Acting President has also reiterated his resolve and commitment to credible electoral reforms that would make future elections credible and predictable. He made this commitment before the representatives of the American government who paid him a visit on assumption of duty as acting president.

The challenges the nation has faced in the last three months have tested the capacity of the National Assembly as a formidable institution that is endowed with men and women of resources and intelligence to move the nation in the direction of stability and sustainable growth.

The National Assembly in the last three years has passed quality laws and resolutions of national importance.

I must also admit that there is the need to do more. The successes of the National Assembly must reflect in the living condition of the people. There is no doubt about it that poverty is still very high in our society and it is an area the lawmakers must pay attention to. We need to promulgate laws that will ensure a maximum performance of our budget and attention must be paid to oversight functions in order to make sure that budgeted infrastructure are delivered according to budgetary prescriptions.

Seven-point agenda of President Yar'Adua
The agenda is the blueprint of the intention of this administration. The successes of this have become a subject of intense controversy, but by and large, this administration has recorded a huge success in providing an enabling environment for positive and legitimate endeavours to thrive. This, the government has been able to do through its tenacity for the rule of law.

The government has also committed a huge part of its resources to the building of some dilapidated infrastructure like road and electricity, and I believe, with some degree of patience, we will begin to reap the benefits.

Governorship ambition
The desire to assume a higher constitutional role in the service of my people to enable me serve better and qualitatively is my inspiration. In the last eight years, I have been the representative of my people in the National Assembly. The position of a governor affords you a better, bigger and quality opportunity to determine the need of your people and simultaneously provide the right solution, without having to pass through so many obstacles in discharging these responsibilities.

Ambition and zoning
Let me begin by saying that zoning is not a constitutional option. You would remember that the same issue came up in 2003 before the emergence of Otunba Gbenga Daniel. Zoning is an internal arrangement within the Peoples Democratic Party (PDP).

And again, I believe I have the constitutional right as a citizen of the state to aspire to any office. It is the people's vote that will determine my final acceptability. It is better where no restriction and obstacle is placed in front of anybody just because he is from a certain part of the state. The beauty of democracy is that there should be a level playing ground where no one is accorded an undue advantage in the election. The people should remain the final and ultimate decider of the person who should rule them.

Most importantly I have served my people diligently in legislative capacity. My sincere belief is to do more in the executive arm, considering my political and legislative experience, administrative experience while in the private sector and more so, as a successful businessman before venturing into politics, I am of the opinion that I have all it takes to serve my people as the number one citizen of Ogun State.

Agenda for Ogun
My agenda for the state is to build a virile, robust and confidence-brimming economy that is capable of driving and propelling and transforming the future of the state into a global economy that has the capacity and vision to carry the destiny of the present and coming generation.

The present administration has set the pace of the development. Our intention is to consolidate on the good work the present governor has crafted in such a way that today, Ogun State has become a reference point in service delivery and tailor-made dividend of democracy that truly addresses the needs and yearnings of the people.

You would agree with me that there is a working synergy between the state and the people in terms of the requirements and basic needs that are meant to improve the living condition of our people.

Our intention is to improve on infrastructural development, employment generation, the opening up of the economic and investment opportunities in the corners and crannies of the state in such a way that we will arrest urban drift and undue concentration in the urban centres. The ultimate result of this is that we will begin to generate development in our rural areas through the building of cottage industries that will enable the people to develop along their own line without any major family dislocation.

There is no doubt about it that power generation will be our topmost priority, since this is what we require to drive and power our economic life to give our people the foundation to develop economically.

The present administration has done a lot in opening up the state in terms of road network. Our intention is to do more, maintain and improve on these roads.

We have also decided to start the construction of light rails all over the state in order to increase the economic movements that are required to move the state forward.