By Ikenna Onuoha CPS To Chief Of Staff 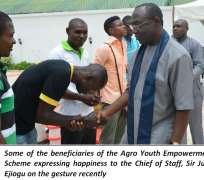 As part of the present government's objective to revamp and revive agriculture in Imo State, the Chief of Staff and Commissioner for Special Duties, Sir Jude Ejiogu has distributed different farm materials to youths in Emekuku autonomous community in Owerri North council area of the state.

The empowerment exercise which took place at the country home of Sir Ejiogu, Umuakuru Emekuku on Friday April 25th, 2015 attracted crème de la crème of youths from all villages that make up the old Emekuku community.

In the cause of the empowerment, the Chief of Staff distributed over 3000 Birds, Pigs, lorry loads of animal feeds, Stoves, Drinkers and drugs of different kinds as part of his efforts in ensuring total eradication of unemployment and youths restiveness in the society.

Speaking, Sir Ejiogu disclosed that he decided to engage the youths in agricultural business to revive most of them who have stayed at home for many years doing nothing as a result of non availability of white collar jobs maintaining that the empowerment would enhance their future productivity.

He further stressed the need for all hands to be on deck in ensuring that youths in the state were assisted in one way or the other in a bid to discourage idleness, armed robbery, prostitution and other social vices saying that reason for the empowerment was to complement Governor Okorocha's giant strides on youth's employment.

Continuing, the Emekuku born Chief of Staff pointed out that prior to the exercise; he organized agro farm training for beneficiaries to garner more knowledge that would equip them take good care of their animals and called on them to utilize the opportunity judiciously even as he revealed that more 22 persons would benefit during the phase two part of the exercise.

The coordinator of the exercise and expert in farming, Mr. Kelechi Igwe described the empowerment as human capital intensity and assured beneficiaries of his willingness to continue to assist them train their animals even as he urged them to always remember Sir Ejiogu in their daily prayers.

In their separate speeches, some of the beneficiaries, Maxwell Nnadi, Kelechi Opurum and Ekene Okwu maintained that Emekuku community boasts of prominent political leaders but regretted that none of the leaders had done what Sir Ejiogu has done for the youths of the area and prayed God to continue to bless him and his house hold.