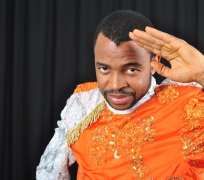 Unarguably the king of northern music industry, Sani Danja is not slowing down in his bid to make a splash on the music scene as he has done with Kannywood over the years.

Danja Records brings the singer's collaborative effort with Terry G, which has become an instant hit since its release.

'Rasu Iyawa', the energetic, bound-to-be-anthem was produced by Terry G and sees the duo switch between slang and Sani's native tongue. The single is an impeccable mash on a thumping instrumentation.

Meanwhile, Danja has also worked with the wave making director, Patrick Elis to shot the video for 'Ruwa Guwa', the single he released to usher in the New Year.

In a related development, Danja is giving away the total sum of 3000 US Dollars to his fans in a singing competition for the cover of his latest track 'Mairo'.

According to the Kano based entertainer, "Three winners will emerge from the competition and each will get a whooping sum of $1000. Fans are to download the instrumental for the song, voice over it and submit their recorded copies to be rated for the grand prize. All entries should be emailed to [email protected] with artist details or drop at any Cool/Wazobia FM radio stations nationwide, while the entry closes on April 30, 2014."

Sani Danja has performed in over 15 countries including Sudan, Ghana, Cameroun, Niger, Gabon, UK, Malaysia and South Africa.
Danja is one entertainer that never failed to delight his fans on and off the screen. Recently, he also thrilled the guest at the African First Ladies Peace Summit held in Abuja Nigeria with his performance that the Nigerian First Lady had to request for him to perform a second time in an event that was transmitted live on the Nigerian Television Authority (NTA) network.