My Uncle, Kingsley Ogoro Never Gave Me The Chance To Act Because....---Evaezi 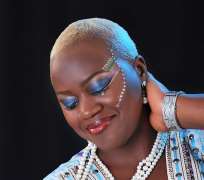 Dark skinned singer and actress, Evaezi Ogoro, has hipped praises on Nollywood producer and critique Charles Novia, for giving her the opportunity of facing the big screen.

According to Evaezi, she said that it was not easy convincing her parents towards her choice of career especially her father.

“Acting has always been a passion. I have always been begging my uncle, Kingsley Ogoro, to allow me act but he never agreed probably because of my late father. I got the opportunity when Charles Novia called me and said he needed a singer to play a part in his movie.”

“My father was a strict person. I was quite stubborn and it has not left me till today. Initially he was not happy with me delving into music. I stood my ground and eventually, his friends had to talk to him that they liked my songs.”