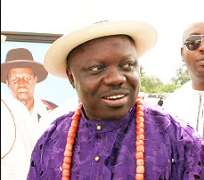 Delta State Governor, Dr. Emmanuel Uduaghan revealed on Tuesday that his administration has contributed over N16 billion as counterpart funding to the New Pension Scheme since its inception in 2007.

He also disclosed that the state spends over 800 million Naira monthly for the payment of pension to retirees under the old and new pension scheme.

Dr. Uduaghan, inaugurating the Chairmen and Secretaries of the State and Local Government Pension Bureaus in Asaba said: “The state government was committed to the wellbeing of its pensioners” stressing that “it has cleared up the backlog of payment for retirees caught between the old and new pension schemes until 2013.”

The governor explained that a committee under the State Head of Service was looking into the difference in the amount paid to state and local government pensioners, assuring that it would be rectified soon.

He commended the state pensioners for their patience and understanding especially during the early period of the implementation of the new scheme, stressing that the state government was determined to clear the backlog of payments and other issues affecting the scheme.

Dr. Uduaghan said that Delta State, which is one of the few states to have implemented the new pension scheme initially, was contributing 16 per cent to the fund as against the approved 7.5 per cent, adding that it has been reviewed downward to 10 per cent.

According to him, even with 10 per cent, the state government was still paying above what it is required to pay, hinting that he has directed the state attorney general and the head of service to look at the enabling law with a view to determining the actual percentage.

The governor commended the Chairmen and Secretaries of the state and local government pensions Bureaus who were being sworn in for their second terms of office, for their excellence performance during their first terms.

He observed that while pension funds in the country have been characterized with fraud and emblements, the story has been different in Delta State.

He said that hard work, transparency, integrity and honesty have characterized the officials of the bureaus in their first term in office, accounting for their reappointment for a second term.

Governor Uduaghan charged them to redouble their efforts and surpass the enviable performance and record they have set at the bureaus.

Chairman of the State Pensions Bureau, Mrs. Christiana Siakpere, responding on the behalf of others thanked the governor for the confidence reposed in them and promised that the Bureaus would move the state pension schemes forward.

She said the Bureaus would continue to introduce methods and procedures that would help them serve pensioners better in order to achieve the vision of the state government for the pensioners.