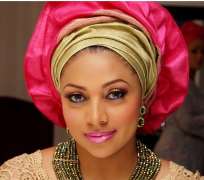 Since the rummoured breakup of P-Square sprung, there have been tales that the wife of Peter Okoye, Lola Omotayo, was responsible for it. Some people accused the woman of instigating Peter against his brothers.

Lola has now reacted to the allegations, stating that she is not behind the issue as being widely speculated.

"I'm a lady of substance, though I have my shortcomings. I might not be loved by everyone, but the people that matter to me hold me in high esteem and that's enough for me," she said.

Lola has two children for Peter, all given birth out of wedlock.