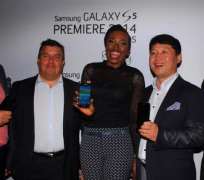 Recently the 'Samsung Brand' hosted a launch to officially announce the new Samsung S5 galaxy phone in Nigeria. Nigerian Ambassadors of the brand, Banky W, Kate Henshaw and Ali Nuhu were present at the event, which held in Lagos state.

The celebrities flanked alongside by On Air Personality and Actress Joselyn Dumas, who was featured in a Samsung S5 launch promo video, and a host of other celebrities took a snapshot together.

Their photo took a strikingly resemblance to the one taken at the 2014 Academy/ Oscars Awards by American Televison host and Stand-Up Comedian Ellen DeGeneres with Bradley Cooper and other stars such as Lupita Nyong'o, Brad Pitt, Julia Roberts and others.

Checkout the selfies of the Nigerian celebrities and that of the international acts. See also other pictures taken at the SamsungS5 galaxy launch.