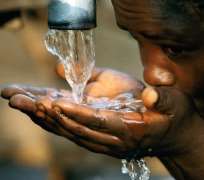 Another 10 Sub-Saharan African governments made separate commitments towards universal access.

The pledges came as representatives of more than 50 governments gathered in Washington, DC on Friday, 11 April for the Sanitation and Water for All High Level Meeting, opened by UN Secretary-General Ban Ki-moon and World Bank President Jim Yong Kim.

UN Secretary General Ban Ki-moon opened the 11 April meeting with warnings that the crisis in water and sanitation will hold back efforts to eradicate poverty.

"Achieving sanitation and water for all may not be cost-free - but it will set people free. Access to sanitation and water means a child free of disease, a woman free of the back-breaking chore to fetch water, a girl free to attend school without fear, a village free of cholera, and a world of greater equality and dignity for all," he said.

WaterAid (http://www.wateraid.org), a founding partner in the Sanitation and Water for All partnership, welcomed the commitments.

"WaterAid welcomes the pledges African governments have made at the High Level Meeting to provide safe water and basic toilets. What is crucial now will be action to deliver those promises. One thousand children in Sub-Saharan Africa die every day from this health crisis. Safe water, basic toilets and proper hand-washing with soap can save those lives," said Barbara Frost, WaterAid Chief Executive.

Among the specific commitments:

* Burkina Faso has pledged to bring potable water to 4.5 million more people in 2015 and to address open defecation by improving sanitation for 3 million people.

* Nigeria has pledged to end open defecation and achieve universal access to water and sanitation by 2025.

Former Ghanaian President John Kufuor, chair of the Sanitation and Water for All partnership, told participants that he would hold them to their promises.

"Sanitation and Water for All is an important mechanism to not just learn from each other, but to hold ourselves accountable for results - results that benefit the poorest and most vulnerable people," he said.

Of the 1 billion people around the world still practicing open defecation, 227 million are in Sub-Saharan Africa; 9 in 10 of them live in rural areas.

Safe water, basic sanitation and hygiene can prevent illness and make a community healthier and more productive. They can also prevent infant and child mortality, improve rates of education, and prevent the vulnerability that comes when women and girls tasked with fetching water must walk long distances to do so, or when they do not have a safe place to relieve themselves.

"This crisis has had a devastating impact on Sub-Saharan Africa's economy, development, and families. But sanitation is now recognised as essential in ending extreme poverty. Our challenge is to reach our poorest and most excludedand ensure that everyone's right to water and sanitation is met in our lifetime. These pledges from African governments are a big step towards realising a healthier and more prosperous future for our continent," said Nelson Gomonda, pan-African programme manager for WaterAid.

In total, government ministers from 44 developing countries made 265 commitments to increase access to water and sanitation, including promises to address massive inequalities in access, including between urban and rural residents, rich and poor, and among ethnic groups and regions.

WaterAid has made its own commitments toward a vision of reaching everyone, everywhere by 2030 with safe water and sanitation, as a founding partner in the Sanitation and Water for All Partnership of more than 90 country governments, donors, civil society organisations and other development partners.

Distributed by African Media Agency (AMA) on behalf of WaterAid.

For more information or to arrange interviews please contact:

The official list of the Sanitation and Water for All country commitments can be found here: http://sanitationandwaterforall.org/priority-areas/political-prioritization/forthcoming-2014-hlm/statements-and-evidence

WaterAid's vision is of a world where everyone has access to safe water and sanitation. The international organisation works in 26 countries across Africa, Asia, Central America and the Pacific Region to transform lives by improving access to safe water, hygiene and sanitation in some of the world's poorest communities. Since 1981, WaterAid has reached 19.2 million people with safe water and, since 2004, 15.1 million people with sanitation. For more information, visit www.wateraid.org, follow @wateraidUK on Twitter or visit us on Facebook at www.facebook.com/wateraid