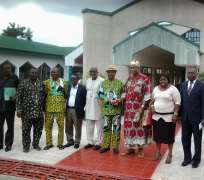 The Anambra State government has set up a seven (7) person Committee to probe the immediate and remote causes of the recent fire incident at the Ogboji section of Ose Okwodu market Onitsha.

Gov. Willie Obiano today inaugurated the investigation committee whose Chairman is Igwe Roland Odegbo, Abogu II of Nteje. The formation of the committee was previously announced in a Public Service Announcement on 14 April 2014 signed by the Secretary to the State Government, Mr Oseloka H. Obaze.

The Committee has until 2 May 2014 to submit its report to the government.