There Is No More Boko Haram, It Is Military Task Force - Military Sources 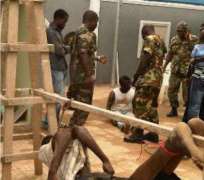 Top level military men in the Nigerian army who spoke to us [ENDS], and another top Nigerian blogger/activist on condition of full anonymity, have further validated shocking reports recently revealed by the Voice of America, VoA, about organized, top command sabotage in the ranks of the army, with army operated ambush and assassination squads.

The military men told us candidly, “there is no more Boko Haram, Boko Haram is gone, it is military task force dong the killings now.” In total 1,710 people were killed in attacks by “unknown” military uniform wearing assassins and incendiarists across Nigeria last week alone.

Apparently troubled by the spate of events in the northeast and around the nation, the soldiers decided to come out and talk to those they could trust; saying that within the ranks, people were afraid of speaking as this could be their end.

The soldiers further described the event the VoA had publicized, stating that another soldier in the ambush who got wounded said the Colonel in charge of the unit left these set of soldiers, taking away all sophisticated fighting equipment and leaving them at the mercy of the better equipped ambushing army unit with only Ak47's and one or two rounds.

The soldiers described frustration among military men taking part in the battle in the North-East, saying many were abandoning the army because they realize their aim of being soldiers has been undermined and the top military generals who benefit financially from equipment purchase and mobilization funding, and may be involved in a possible plot to depopulate the areas, in the conduction of the ongoing war are not going to stop the sabotage any time soon.

One of the officials who revealed this information, refreshed the events of the killing of Nigeria's loved and distinguished veteran, General Muhammed Shuwa in 2012; explaining that at the time too, the defense guards stationed by his house were pulled away to facilitate his murder. The military man described so many cases of successful 'Boko Haram' attacks including a recent on students in which the army stationed was always suddenly pulled out preceding the attack or cases where the army responded to invaded villages telling them their village was not in their jurisdiction. See: Revealed: Soldiers Watched As Gen. Shuwa Was Killed-PM News, Lagos

Accusations of deliberate extrajudicial attacks are not alien to Nigeria's security services. A recent attack at Keana in Nasarawa state, in which 15 innocent locals were summarily executed by military uniformed men with APC's and military pickup trucks, has also been blamed on the Nigerian military, and an investigation is being conducted according to military spokesman, Major-General Chris Olukolade. On April 8, the Nigerian Human Rights (NHRC) indicted the military in “Apo 8” killings which happened right in the nation's capital, Abuja. Locals in Zamfara also accuse the state security of knowing the perpetrators of the recurrent massacres including the latest this month where 250 were killed. Alhaji Amadu, the village head of Yar Galadima said several leaders of the military uniform wearing assassination squads, namely a certain Buhari (not the ex-president), a Kundu and another terrorist leader, Munjagara, have been arrested and released by government authorities who know where their terror dynasties from where they operate are located. Also related, on the possibility of top Nigerian security department involvement, is a recent 'revelation' by a Turkish airline manager about dropping off ammunition for terrorists at Nigeria's Kano international airport. Nigeria's government is yet to formally refute these allegations.

The army men further explained that with the amount of military checkpoints in the areas of conflict it was impossible for terrorists to ply freely with Armored Personnel Carriers, APC's as they did. “No one can move about in those areas with all those checkpoints, how do the terrorists get around… it is because the army gives them passage,” he said.

On the Helicopters flying in Nigeria's air spaces which has been happening for two years now, a soldier said that a person he knew who was kidnapped for a month in a Boko Haram camp described seeing these choppers fly over to drop weapons and food routinely; he said the food included good chicken and burgers from Mr. Biggs, food ordinary people could not afford and that came from the cities. He said it was impossible for choppers to keep flying safely like so in Nigeria's monitored airspace without there being military involvement. It is reported that choppers also help the military dressed attackers who have been ravaging the middle belt of Nigeria, the states of Benue, Kaduna, Katsina and Zamfara.

One of the military sources also told us that a popular journalist mediator, Ahmad Saldika, who used to inform Nigerians on the true happenings with Boko Haram, left Nigeria on self-exile to the UAE because he was afraid of being killed by government forces who knew he knew the truth of the situation.

On the Giwa barrack attack that successfully freed hundreds of jailed terrorists, military sources told us that a 'pin' on the armored tank stationed to protect the barracks was surprisingly removed and thus the tank could not protect the barrack when 'Boko Haram' struck. They also queried why despite the military being informed three weeks to the attack, the military did not adequately beef up security to protect the Giwa barrack from the terrorists attack.

It was explained that Boko Haram was basically eliminated by the Joint task Force, JTF by August of 2013. The sudden withdrawal of the highly successful Joint task Force, JTF, special units that was collaborating well with the Civilian JTF and had succeeded in winning the war and even reported mortally injuring the terror leader, Abubakar Shekau, was a surprise to intelligence analysts world over and to the military men. [See analysis by Victoria Ibezim-Ohaeri: Disbanding the JTF in the North-east was a grave mistake; Ynaija] It can be recollected that it was immediately when the JTF reported success and their killing of Abubakar Shekau that the government suddenly announced the withdrawal of the JTF and their replacement with a new army division. This was followed by a new unexplainable escalation in terror and was when, according to the sources the new 'Boko Haram' came into being and its methods suddenly changed into the successful invasion and extermination of whole towns in the north by army uniform wearing fighters.