Captain Emma Ihenacho Opens Up on Vision For Imo In APGA 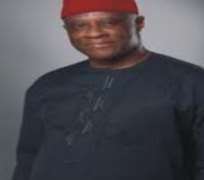 By claiming that there has been noticeable short comings on the part of civilian governors who have ruled Imo state in the past, including the administration of Owelle Rochas Okorocha, former Minister for Interior, Capt Emma Ihenacho has declared intention to provide the missing link if elected governor in 2015.

Addressing newsmen in his Owerri home, Capt Ihenacho said that he is qualified more than others and possesses what it takes to take Imo to the promised land.

The great player in petroleum industry said that if given the chance to govern Imo which by the special grace of God is realizable by 2015, he will focus on rapid industrialization, job creation, youth and women empowerment, and provision of basic social amenities to the masses.

While disclosing that he will have a contract with the masses to be able to fulfill his pre-election promises if he enters into Government House, Owerri, Capt Ihenacho who recently, left PDP for APGA opined that he would encourage sustainable agriculture base, quality health care, regular payment of salaries and pensions, quality and real free education and quality shelter and housing to Imolites.

The shipping magnate enumerated that the inability of previous administrations to explore and transform certain economic factors for the benefit of the masses has hindered development in the state, adding that those opportuned to be at the helm of affairs are yet to touch crucial areas that would have had positive multiplier effects in Imo state economy.

Capt Ihenacho who claims to stand tall among other aspirants seeking the guber job for 2015 election, noted that his chances of grabbing the plum position is further brightened by the fact that he is from Owerri zone, the favoured zone entitled to produce the next Imo governor.

'I am qualified, not just because of zoning, but because I have what it takes in all ramifications to take the state to greater heights. My chances are also bright considering the clamour for Owerri zone to produce the next governor'. This is not the first time. I discharged my duties effectively and touched the lives of people when I was minister, he said.

On why he defected to APGA, the former PDP chieftain opined that his new party provides a veritable platform to realize his ambition of delivering democracy dividends to the people, stressing that APGA has always emerged victorious despite intra-party crisis. According to the guber aspirant, schisms are part of party components adding that his entrance to APGA could provide the magic wand for peace to return in the party even as he noted that APGA is Igbo political identity.

Capt Ihenacho denied any rift or looming trouble with fellow Emekuku-Owerri North born APGA Chieftain Chief Martin Agbaso, rumoured to be interested in the governorship race. He stated that the new wave of cross-carpeting in major parties allows APGA to also accept new members like PDP and APC which have been receiving new members.

Said he 'I have no problems with anybody for joining APGA, I never thought about having problems too before joining and do not wish to do so. I have only come to contribute my quota to the growth of the party I consider is for Ndigbo, because it is the only platform to rediscover ourself in the polity'

The interactive session was crowned with an award extended to him by a group in the national arm of the party called APGA Youth Vanguards, who decorated him with a meritorious APGA honour for selfless service to the party.