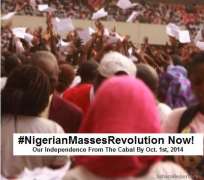 Dear million youth applicants and all tens of millions of unemployed youth,

For too many years Nigeria has been bound by shackles. For too long, Nigerians have lacked and missed opportunities of true growth, true strength, true progress, true peace, true prosperity and true national competitiveness.

For far too long, the Youth of this great nation and the great nations within have been imprisoned, driven like slaves with no opportunity, no respect, norecognition, no hope and at last, not even life security.

For far too long, this nation has had only looters at the top, who do nothing and plan nothing except if it is to loot. For far too long have we been led by executive Looters and not leaders.

For way too long have we complained, cried, prayed, hoped and begged for a change of heart from the crop of rapacious monsters, the vulture cabal that have held the great destiny of Africa's largest nation to ransom. We know it all, the death, the corruption, the impunity, the renting youth only as political thugs, the creation of terror, the sponsor of terror, the promotion of genocides, the pogroms. The formulation of the nation, maintained by the handful of cabal, only to exploit and plunder. The cabal, the caucuses. We know it all. We know the pain and the deaths that have been our curse for far too long.

But This Wait Is Over

North, East, South, West, we shall declare our independence from the recycled politicians and cabal, October 1st this year. We plan and prepare now, and we organize and rally before or by August.

We are the Fumilayo Kuti's, the Awolowos, Enahoro's, Ziks, etc of our generation who fought for the independence of #Nigeria from the colonialist. We have today declared the revolution for our second independence open.

This is our second chance at hope for our people, our independence from the cabal; our 2nd and true independence. Do not be a coward, do not be weak. Join the #NigerianMassesRevolution. Declare and march like a soldier on the land. You are the true owner of the land. We are driving these crazy baldheads out of the town as Marley said. Do not walk, march. Yes, march. We are the soldiers of our destiny, the crusaders of our better tomorrow.

Right now with this evil, cursed vampire cabal, Nigeria is scoring more violent deaths than Libya, Egypt, Afghanistan, Iraq, perhaps as many as Syria! How many pogroms shall we witness and do nothing? This is the revolution that will bring peace and life to the land. The cabal with their atrocities declared war on us long time ago. 20,000 were killed by terror since 2011 and hundreds thousands more have died of all pain, hunger and economic terror of this cabal rule. This is over.

We Will Celebrate Our Independence From The Cabal By Oct. 1st, 2014

It will be a big party in Nigeria, October 1st this year by God's mighty grace. With steady feet, and a clear vision, the new leaders, the new system and formulation of the nation, and the new people of this land, the new generation leaders of these territories will sing a new song across the land. This will mark a second beginning and a chance for hope for the states, the regions and the entire nation.

From the great plains of the El-Kanem Empire to Oodua, to Biafra to the Sokoto Empire, declare. Make your ancestors proud, make your children proud. Liberate your region of this great nation from the shackles of slavery to the greedy, drunken, murderous cabal.

We are one in the struggle—the masses. All parts are whole and whole is made of all parts. Our diversity and 'disunity' will be our strength in this liberation. The divide they sponsor shall be the fuel of this revolution and liberation of the great people's and nations of Nigeria from the thieves that have for most of 53 years, held this nation to ransom. All people's control your destiny, control your land. Together, we will forge a great nation, with discipline, truth, opportunity, respect, honor and justice.

Let all of us youth prove the uniqueness of our people, the strength of character and greatness of our individual heritage in the capacity and success through which we each make this revolution successful in our parts and for the whole. Now is the time to prove our individual, ethnic and collective mettle.

No longer shall we cry and whine about the rotten stock of old recycled goons. No longer shall we protest this and protest that. Now we want our freedom. Now we protest our last protest and present our last submission. We shall be proud that we fought this war, we overcame this hurdle, we won this battle; yes, it was we that sent packing the old goons, those names and their god-sons that we have heard over and over, since the colonialist's era. They shall do what old people do: They will retire. Nigeria will be free. The great nations will be free. Our parents—if they have so-far survived this travesty—shall hug us for doing them proud.

“Like A Muddied Spring Or A Polluted Well Are The Righteous Who Give Way To The Wicked.” (Proverbs 25:26)

We are making history. It will be written in history books, not that the 168 million Nigerian masses remained weak and broken, oppressed eternally by a few hundred wicked and heartless cabal. No, it will be written that Year 2014 was the Nigerian Masses Revolution. We will remove this nation from the gutters of history, as the most terrorized and corrupt nation, with so much wealth and the world's most wicked thieves in power who steal three quarters of the nations endowment and leave the masses to fight each other over one quarter. No, we reject this—for everything there is a season. This is our Jihad. We have declared the season for the Liberation of Nigeria; for Freedom!

Dear youth, this is a promise that from now on; there will no longer be unemployment in this land. The tens of thousands of unemployed youth will be respected and rewarded for being inheritors of this blessed part of Africa. Work this revolution and secure your right to work or to be catered for by the government for ever more as is due of humans and as is the duty of nations as stated in the Bible and Quran. We organize, we march and we reclaim our destiny.

Please join the revolution and invite everyone. Let's do this. On facebook: https://www.facebook.com/nigerianmassesrevolution#

Use any hashtag, OccupyNigeria, EnoughIsEnough, #WhereIsOurMoney? #NISMurder or #NigerianMassesRevolution All people's, all parts and all peaceful roads lead to the revolution which's time has come.