The North Wants True Federalism Restored: And The South? 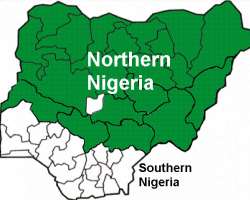 Where we are going—where we are coming from. To properly appreciate what the north and I believe Nigeria as a whole wants, we may benefit from a little history rehash:

In 1966, a young soldier, Kaduna Nzeogwu attempted the first coup that led to the military eras that marked our history. His coup attempt, though possibly not tribalistic in intent also aggravated and sharpened ethnic divides that perhaps may have resolved naturally had things panned otherwise.

In an attempt to redress the aggravating tensions and suspicions that had come to the fore, especially after the Nzeogwu coup, Aguiyi Ironsi on 24 May 1966, with Decree No. 34 ended up plunging Nigeria into a deeper mess and bloodier abyss. Aguiyi Ironsi's Decree 34 “abolished the regions,” and ended Nigeria's true Federalism!

Excerpt from Ironsi's announcement:
“The provisions of the Decree are intended to remove the last vestiges of the intense regionalism of the recent past, and to produce that cohesion in the governmental structure which is so necessary in achieving, and maintaining the paramount objective of the National Military government, and indeed of every true Nigerian, namely, national unity. The highlights of this Decree are as follows: The former regions are abolished, and Nigeria grouped into a number of territorial areas called provinces. . . . Nigeria ceases to be what has been described as a federation. It now becomes simply the Republic of Nigeria.”

Compounding the sequence of errors, General Olusegun Obasanjo upon restoring Nigeria to a Civilian regime in 1979 had a new constitution instituted, which converted Nigeria from the Parliamentary system of governance to the Presidential system. With the more money wasting Presidential system, the president became the supreme leader, with unlimited powers and virtually impossible to check and dethrone. The entire electorate of diverse millions would become involved in ethnic fractionating, senseless battles to select a single man for the entire nation. This system is known to trigger ethnic fracas most especially in highly diverse societies. India, another nation that has as many as Nigeria's 516 ethnic groups utilizes the Parliamentary system whereby regions only have the responsibility of electing local representatives. The battle for leadership happens in the parliament where the representatives select the Prime minister.

With these three significant events, Nigeria was on a path of intractable gloom. Compounded with the secession desire of Biafra, after a series of post-independence deadly-events, which started from Nzeogwu's killing of northern elite in his coup; a provocative bread-loaf by south-eastern bakeries in the north which depicted Nzeogwu as the Saint killing Sardauna—the dragon, in the medieval 'Saint George and the Dragon,' tale; ethnic wars in the north with a northern upper hand in the numbers murdered; retaliatory wars in the south and finally Ojukwu's demands.

Historians believe that with Decree No. 8, Gowon gave Ojukwu 95% of the Aburi accord demands.

Gowon's Decree No. 8 of 1967 effectively restored Nigeria to a confederacy.

The Decree stated:
“…legislative and executive powers of the Regions have been fully restored and vested in their respective Military Governors. But the provisions of section 86 of the Constitution of the Federation ensure that no Region shall exercise its executive authority so as to impede or prejudice the exercise of the executive authority of the Federation or to endanger the continuance of federal government in Nigeria.”

Ojukwu was not satisfied, he waged the secession war and Gowon, a Middle Belt young leader from Plateau state, together with his army commander, Colonel Olusegun Obasanjo, defeated the seceding east in a war that would result in up to a million deaths, mostly from famine, due to debated dynamics and politics of the war.

In the course of the war, the seceding Biafra would lose the south-south and the south-west. The war also included invasions of regions outside the 5 Igbo states, this included notably a mid-west invasion as detailed by Dr. Nowamagbe A. Omoigui. It is important to realize as our history is considered in appreciating our present, that the Biafra war was not simply a secession attempt but involved annexation and conquest of other parts of Nigeria. Ojukwu later joined Nigeria and Biafra talk was practically eliminated till after he passed.

Several military junta's, mostly from the north—especially middle belt—and Yoruba south, took turns at ruling Nigeria under the gun. The third largest ethnic group, the Igbo's (excludes Jonathan) barely occupied the top position, nor, of course have the second largest group, the Hausa led the nation, or any other of the 500 remaining ethnic groups. The democratic history of Nigeria has been equally distributed 50:50 between northern and southern candidates. The leadership spread in years ruled has been: Yoruba (11), Fulani (10), Gwari (9), Angas (9), Bageri (6), Kanuri (5), Berom (1), Igbo (1-7), Ijaw (4), Hausa (0), The rest 500 (0).

What The North Wants
In review of the history, we see several key errors, and painful, deadly events that contorted Nigeria's development and prepared a platform that gave opportunity only to a handful of elite cabal.

What the North wants and needs, perhaps all Nigeria desperately wants and needs at this moment: An abrupt division of the country into several nations may be hard-impossible-bloody at this time. But urgently, Nigeria needs a restoration of true Federalism with each region being able to compete in securing and developing its economy, protecting its citizens and values and steering its future.

We need the egregious errors of Aguiyi Ironsi reverted. The north and every other part of Nigeria need their own leadership to secure life and provide hope and prosperity for its people. Abuja cannot hold the nation. There is violence, theft, kidnapping, oil bunkering, high sea piracy, ritual killing, child persecution as witches and what have you, in the south. There likewise is 'Boko Haram,' 'Herdsmen Haram,' 'Unknown soldier Haram,' and all other sorts of population genocide in the north.

The current president is totally disconnected not only from the north, but also from his own village. Perhaps good leadership would have staved off these critical crises, but 14 years of greed-laden, visionless democratic rule has determinately turned what was manageable before on its head and sacked all hope. Niger Delta militant leader, Mujahid Asari-Dokubo is quoted to have said that 'Fulani Buhari would have done more for the people of the Niger Delta' than the current president who he only supports in tribal patronage.

The exemplary behavior of the Civilian JTF in the northeast elucidates the need for state police. Those involved in the struggle to secure the northeast clamor for such reformations. If these young men who know the in-and-out of their neighborhoods are in charge of security and equipped with guns and not the knives they manage with great efficiency, Boko Haram terror would long be a thing of the past. The people of Borno arrested sponsors of terror, but Abuja released them. How can such a system work?

The north is the poorest region of Nigeria. Poverty levels in the north are as high as 85%. Most of Nigeria's 100 million destitute (living under a dollar-a-day) are in the north. The masses of the north do not benefit from the equation as is, and the people look toward Abuja for opportunity and restoration of their livelihood, their farming, their grazing, their textiles; but looking to one Abuja only and pointing fingers at Abuja leaves this region which spans 80% of Nigeria's land mass, in abject poverty.

It is similar in the south where oil pollution, armed robbery, kidnapping and other dangerous menaces destroy hope and leave a blessed region, poor in hope and in spirit. As though under a curse: death, mega corruption, authority wickedness and international shame are Nigeria's current endowment. A most recent survey by the Growth Youth Wellbeing Index, published this Thursday, ranked Nigeria the worst nation in the world for the young to prosper! It is enough playing games with our future.

The real question to be asked is—why will the current president not give the north, west, south and east what they all want —regionalism now with the possibility of disintegration later? Why will he not put the 'S' in the national conference? Can we have a referendum on this basic quest without further sleeping—in the national conference—and further deaths and waste of the nation's time? You do not need N12, 000,000 and comfortable chairs to figure out that we need regional governments and a simple formula where each region only contributes a small fraction of its income to a skeletal structure in the F.C.T.

This opportunity for Nigeria to get what it wants is being wasted again. This is one of the main reasons why some of us do not support this president and wonder at the hypocrisy, short sight and suicidal mischief of those who do. Perhaps it is shadenfreude; a sick thrill watching him make people suffer. He refuses to make solid steps towards restoring our true federalism. He cowers from discussions of sovereignty options; this president, a student of dictator Abacha, loves the status quo with the pain and genocide north to south. He, like the northern elite, whose 'what they want,' no one should be confused about, want only to stay hidden from the wrath of the cheated, denuded masses.

To tell you the truth, I'm thinking—some of us select senatorial candidates and even support presidential candidates to send to Abuja, not for what we expect them to do for us, but simply to go there, hurt some other 'tribe,' for us. If we were to select regional leaders to spear-head the development of our region and our region alone, you will be surprised how we will say, 'hold on, let me think about this real deep, no, not Farouk, take Soyinka instead.'

And What Does The South Want?
Now that's the other question. A Yoruba empire as Fani-Kayode wants? Igbo-Biafra as Kanu wants? Federalism? State-nations? Status-quo as many southern leaders and the president from the south want? Do we take what Jonathan wants as what the south wants? I fail to believe so. If there is a region in the south that supports him and wants him with his addiction to an Abuja executively controlled entire Nigeria; when we divide into regions, that region can keep him as their premiere. I must confess; I am most surprised at people who live in the north. I wondered how they tolerated pogroms against their guests, now I know. This pogrom is hitting them squarely and they are sitting and taking it. Such 'simple' people: no reaction, no anger, dying in hoards and going about their business. The north right now is on fire and more than any other region, I dare say, urgently needs a regional government that is connected with the concerns and aspirations of its people.

I believe I as a Middle Belt northerner, from a region that it is said, holds Nigeria together yet is a major fault-line and whose 'people,' the middle belter's ruled Nigeria the longest, have presented what the north and Nigeria as a whole needs. I pray this discussion continues and yields dividend.

*A side: Study the locations Dangote sets up his industries and you will know the parts of Nigeria projected to be most stable, tolerant and consistent when all goes awry, if all goes awry.