As Women Ask For More Slots In Governance
By Nwaorgu Faustinus 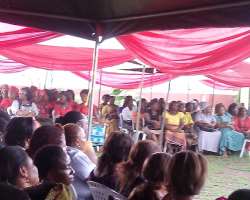 The All Progressives Congress (APC), Rivers State Chapter, on 1st April, 2014 concluded its seven days fasting with pomp and pageantry, using the opportunity to pray for peace, good governance and the wellbeing of Rivers State and her people. The party at a ceremony held at the State Secretariat in Port Harcourt also prayed for wisdom, protection and good health for the first family of Rivers State (Governor Chibuike Rotimi Amaechi, his wife and children) and the members of the State Executive Council, including the Speaker, Rt. Hon. Amachree Otelemaba D. and members of Rivers State House of Assembly. Prayer was equally offered for a successful tenure for the newly appointed Chief Judge of the State, Justice P.N.C Agumagu.

Evangelist Dr Davies Ibiamu Ikanya, the Interim Chairman of APC in Rivers State, who declared the fasting session closed, urged party members to embrace God, saying that without Him, all the party's efforts to provide good governance for Rivers State and the entire nation would be in vain. 'With the fasting we have shown to the entire world that all our activities are centred on God. In other words, those fighting against Governor Amaechi and the APC leadership in Rivers State are indirectly fighting God and they will never succeed as our own God is a great Warrior and consuming fire ever ready to protect his children and shame our enemies,' he said.

Evangelist Ikanya emphasised the readiness of his administration to organise a successful Ward Congress of the party come April 5, 2014. He urged all party faithful to shift all forces to their localities and ensure that credible persons are elected at the Ward level as that is the engine room of the party's campaign for the 2015 general elections. If we fail to get it right at the Ward level then we are doomed as a party as the State may fall into the hands of the evil minded people in PDP, Dr Ikanya enthused.

'On our own side, all the relevant materials and manpower have been mobilised to all the Wards of the party in the State for a successful congress,' Ikanya said. 'For each ward, 22 officials and four ex-officio members will be elected. We will also elect delegates for the Local Government and State Congresses. The spirit is very high and members are willing to ensure a successful ward congress. Security would be tight during the ward congress and warned that party would not condone acts of indiscipline from members. Members should conduct themselves in an orderly manner to ensure successful ward congress,' he added.

In her speech, the APC Woman Leader, Evangelist (Mrs.) Caroline Naagbo, congratulated everyone for finding time to attend the meeting despite their tight schedules. She urged them to be courageous and commit everything to God as their only hope in life. Evangelist Naagbo urged them not to relent in prayers as it is the only key to victory. She went further to admonish all in attendance that APC is the only party that can bring the expected change and that everybody is equal in the party. She commended the Deputy Mayor, Hon. Nancy Stephens Daopo, for making the womenfolk proud by becoming the first woman to occupy that position since the creation of Port Harcourt Local Government Area (PHALGA). 'All of us are aware that our Governor is gender sensitive but we urge him to offer us more slots in the State Executive and ensure that women are given more responsibilities at the Local Government Councils as we're ready to mobilise ourselves and youths to ensure that APC forms the next government come 2015,' the APC Woman Leader said. The event was concluded with prayer by Pastor (Mrs.) Gloria Lete.