Choosing Vision Over Gains: A Model For Leadership 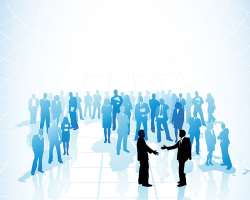 The political arena in Nigeria is now dominated by stakeholders and helmsmen who put personal benefits ahead and above serving the people- their primary responsibility. Their system of new politics is to loot voraciously funds from state treasury with the cliché "dividend of democracy".

Their actions have brought us to the point where we ask ourselves a very fundamental question whether political interests should be based on gains or visions? Perhaps we are missing the purpose of governance

Unlike many developed countries in the world where politics is played based on vision and ideologies, ours seem to have deviated from this very essence. We now see elections without clear and meaningful manifestoes as normal provided their message tickle our ears or sounds interesting. Mind you, once candidates share gifts and money in the name of mobilisation the election is a done deal. Highest bidder electioneering.

We can hardly change much about this situation, the electorates already have this mindset that the electioneering season is the best and only time they can benefit from the largesse of state.

with Chief Ibori and Chief Alamieyeseigha as veterans based on the "badge of honor" they proudly carry. We can't ignore the traits and efforts of Diezani Alison-Madueke and Ngozi Okonjo Iweala. What a man can do a woman can do better. NOI and DAM's latest saga help validate the above assertions.

Though it is the fact that many of our politicians today are accidental politicians (El-rufai wrote a book to emphasize that) and their sudden entry into the "lucrative business" was due to the fact that those with genuine intention to build and develop our country did not believe in the dish the military was serving in 1999.

So those who were bold enough to handle it were solely interested in what they could get out at least before any military usurpation as it happened in 1993.

Looking at the political arena of Delta State at the moment, the major players and stakeholders are keen on protecting their interests in other to remain relevant. This term, in Nigerian politics, means how much money or contract you can get from the government? As if not enough, those pests use their influence and relevance to seek for fresh ways to loot and embezzle state funds for personal gains and frivolous activities.

With lack of vision and the constant embezzlement of funds, states are left with failed projects and neglected contracts.

Administrators award contracts to their cronies and associate who often times falter in executing such projects.Empowerment. Little wonder all that the youths can boast of is the state of "no jobs, no income and no assets". This intense pressure of lack of sustainable means of livelihood has led several unemployed youths to get involved in crimes and illegal activities.

When we look far and near there's only one advice to give--- Let's get ready, we too must participate in building our future; we should focus on ideological leadership and visionaries whose main interest lies with the people. Men with dreams and vision to build and develop our state and not kleptocrats and corrupt leaders who are merely concerned about the gains.