Imo: A House And Its Comedians 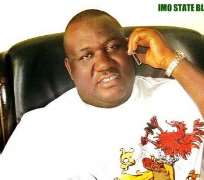 I condemn in strongest terms the nomination of Hon Barrister Ikenna Emeh as the Committee Chairman of the probe panel . Hon Emeh we all know is the bossom friend of the Speaker Rt Hon Benjamin Uwajumogu. I regard the nomination of Hon Emeh as Chairman as a grand plan by Uwajumogu to cover his tracks on the alleged looting of Imo monies. I observe that the Speaker's office has been unable to provide concrete points to deny the hard facts on the Speaker's looting of Imo monies rather they have resorted to name callings.

Even the comments, actions and body language of some of the members of the House of Assembly tend towards a cover-up for the Speaker. The Speaker's media aide Emeka Ahaneku is a misfit media aide. He should go and learn public relations from the CPS to the Imo State Deputy Governor Uche Onwuchekwa and even from the CPS to the Governor of Imo State Sam Onwuemedo.Uche and Sam are doing well projecting the image of their boss.

I say boldly that setting up a probe panel to investigate you with your bosom friend as chairman clearly underline the fact that the exercise is nothing more than a hoax, a big make-belief. A plan to give the Speaker a clean bill of health. It is also comical to see Hon Stan Dara as member of a committee that will investigate allegations against the Speaker and himself. I say boldly that the Rt Hon Benjamin Uwajumogu's probe panel is no more than a smokescreen to divert attention from the monumental and unprecedented corruption in the Imo House of Assembly. It is a momentary sensation meant to deceive the public. It insults the intelligence of Imolites and those of us who called for a probe of the Speaker.

Some of the members of this kangaroo panel are morally lacking to initiate any manner of investigation much less a probe against Mr. Speaker and they have over time behaved like rubber stamp, in fact more or less like zombies . In effect I say boldly that this particular probe panel members cannot look Mr. Uwajumogu in the face and come out with the truth. I therefore call the probe panel a comedy panel ,a Papa Ajasco one for that matter.To me, Uwajumogu is a capitalist non performing speaker who supervised the sack of 10,000 Imolites, I mean our Imo 10,000 brothers and sisters. This big-time pen robber at the helms of Imo House of Assembly having run our youths out of jobs went ahead to loot our monies via road contract scam. He should step aside and allow the house members on their own to set up a panel to investigate him. This panel to me is like a Nollywood movie where the end can be easily predicted from the beginning. The Speaker, under the rules of natural justice, cannot be a judge in his own case. When Patricia Etteh was involved in 628million naira contract scandal, what happened? She was asked to step aside. Even Chuba Okadigbo was asked to step aside.

I cannot be intimidated by the Imo House of Assembly to stop speaking my mind. I will continue to speak out. I recently made a peep into certain aspects of the House by showing some pictures of properties fraudulently acquired by the Speaker and some members of the House. Also I displayed pictures of some roads that he(Speaker) awarded to his company Werdis Limited . I told you that Lake Nwaebere Street in Aladinma Housing Estate was poorly rehabilitated by him via his company Werdis Limited. He collected millions of naira and did a poor job. I told you that Mbano Street (road 17) Aladinma Housing Estate by NYSC office was poorly rehabilitated by his company as well as New Road 1 with bridge leading to Concorde Hotel from JPROSS road.

Another road located at opposite St. Peters Anglican Church Ikenegbu Layout by Fano Hotels was also poorly executed by Uwajumogu's company after collecting millions of naira.I told you that over 3 billion naira has been looted and carted away by the Speaker via road contract scam and that he used the money he got from the road contracts scams to acquire eye popping mansions in Nigeria. I did show you some pictures of some of his properties in Owerri and will show you more pictures both in Owerri and outside Owerri soon amongst several breath-taking evidences of heavy looting.

The few pictures that I released are " mere tip of the iceberg". In essence, I want you to know that the mind boggling revelations of corruption and misdeeds of the Speaker is also tied to the gangster looting members of the House Committee on State And Rural Roads Monitoring.The House members show of anger against my disclosure is a bold face conduct of incorruptible crooks. Onye Nwere Nti Nya Nuru.