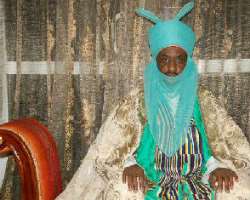 Some people heaved a huge sigh of relief when erstwhile Central Bank of Nigeria (CBN) Governor Mallam Sanusi Lamido Sanusi was eased out, while away at a meeting with other Central Bank governors in Niger Republic. Our aim here is not to argue whether the President could lawfully suspend the Kano royal prince. Also, it is irrelevant whether it was suspension or outright sack because it means the same thing. He allegedly was suspended for financial recklessness, fraud and embezzlement of public funds in Nigeria's petroleum industry based on a report by the Financial Reporting Council Of Nigeria.

Whether there was uproar or applause over his sack, the point is that his tenure will expire in a few months. Sanusi was appointed by the late President Umaru Musa Yar'Adua in June 2009.

It did not bode well for him that immediately after his sack, former Vice President Atiku Abubakar, came to his defense urging him to go to court. They will make strange bed fellows, especially if Sanusi joins APC and decides to contest for an elected position in 2015. It will not be strange as his predecessor Prof. Charles Chukwuma Soludo unsuccessfully contested for 2010 Anambra State governorship election. I am sure the northern political elite can find a place for the now unemployed economist.

The former CBN governor has engaged in activism that has put him on collision course with the National Assembly (NASS) members and recently with the Finance Minister and Minister for Petroleum Resources. I guess if you mess with the President's leading ladies, you put yourself in a mess.

He was also a staunch proponent of removal of fuel subsidy that almost wrecked the country in January 2012. Additionally, Sanusi, an Islamic scholar, was on the forefront of the establishment of Islamic banking in Nigeria, much to the disapproval of some uninformed people. Yes, Sanusi is a very committed Muslim both professionally and personally. He is married to Sadiya, a princess/daughter of the Emir of Kano, His Eminence Ado Bayero. It should also be noted that Sanusi was turbaned as the Dan Maje Kano in 2012. It makes him Son of the Emir with responsibilities towards his own people. This may explain why he gave 100 million Naira of CBN money to victims of Kano Boko Haram attack, but none to victims anywhere else.

Senior Deputy Governor of the CBN, Dr Sarah Alade was initially named as Acting Governor, but the president had forwarded Mr. Godwin Emefiele, the present managing Director of Zenith Bank PLC as the next governor of the CBN to the Senate for confirmation.

As soon as he was named, there were several questions raised about Sanusi's qualification, not just academically, but also in terms of emotional intelligence (temperament). As compared to his predecessor and other Governors of African Central banks, he was found wanting academically. What also amazed many people was Sanusi's penchant for opening his mouth too often. Prof. Peter Ekeh of NYU was quoted as saying 'Lamido Sanusi probably tells the truth, as he sees it, without fear or favour. In other words, he sees himself as a gadfly in public discourse. In doing so, he offends significant constituencies.'

Another critic, Dr. Frederick Fasehun stated that 'Sanusi has remained unapologetic and unrepentant of his ethnic chauvinism. In the past, he has said of the Igbos in a paper, 'Issues in Restructuring of Corporate Nigeria,' that: 'The Igbos themselves must acknowledge that they have a large part of the blame for shattering the unity of this country.'

Sanusi allegedly stated that 'The Yorubas: the greatest obstacles to nation-building, are the Yoruba Bourgeoisie, I say this also to underscore my point that until they change in this attitude, no conference can solve the problems of Nigeria. The country cannot move forward if the leadership of one of the largest ethnic groups continues to operate, not like statesmen, but like common area boys.'

Another jingoistic statement attributed to Sanusi is that 'the problems of this country have a lot to do with the shift in power away from the Fulani to individuals like Babangida and Abacha, products of lower cultures. The Fulani of the North, proud of the history of the establishment in Nigeria - Ahmadu Bello, Murtala Mohammed, Aminu Kano, Shehu Yar'Adua, Shehu Shagari, Jibril Aminu. They are sad that other Nigerians do not know the difference in ethnic background between, say, Murtala Mohammed [Fulani] and Ibrahim Babangida [Gwari].'

In less than a year after he assumed office, Sanusi offended a lot of people including Christians, Muslims, Ibos, Yorubas, and many other ethnic groups. A CBN Governor is not supposed to be engaged in politics.

Clearly, All Progressives Congress (APC) will recruit Sanusi for its Islamisation Agenda. In fact, APC Chieftain and former FCT Minister, Nasir El-Rufai was one of the individuals that received Sanusi at the airport when he arrived from Niger Republic, and made sure they did not miss a photo opportunity.

According to the Oxford Dictionary, Existentialism can be described as 'a philosophical theory or approach which emphasizes the existence of the individual person as a free and responsible agent determining their own development through acts of the will.' Psychologists will tell you that those who believe or practice existentialism do not make good leaders in a democratic society. As far back as 2010, the question was posed in an online forum about Sanusi's temperament: 'Should he therefore expect to hold an office that is owned by the entire country?' The answer is obviously the reason why Mallam Sanusi Lamido Sanusi could not be put at the helms of a body that belongs to all Nigerians.

Whether it is existentialism induced jingoism, the polity should be relaxed now that Sanusi is no longer at the helms of CBN.

The man with matching first and last names (surname) could not leave without having the last word. He took a pot shot at the orchestrators of his demise by stating emphatically 'You can suspend an individual but you can't suspend the truth. If this is all about the concerns around oil revenues in the oil sector, if this is going to bring back the 20 billion dollars then that is fine.'

Whatever will happen with the missing $20 billion or $10 billion oil money, is left to speculations - and we do not mean oil speculators. We still want to know - with or without Sanusi.