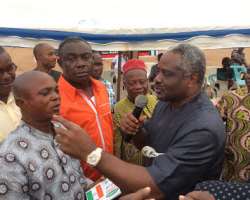 The governing board Chairman, Oil and Gas Free Zones Authority, Hon Chris Asoluka (Okwuruoha) has called on ndi Igbo to align and recognize themselves with the political party that will see to the reelection of President Goodluck Jonathan, adding that it is desideratum for the people.

This statement was made at Nekede in Owerri West, where Peoples Democratic Party (PDP) received over 1000 supporters of the All Progressive Congress (APC) and All Progressive Grand Alliance (APGA) who decamped to their Party.

Speaking to the Party supporters present at the event, Okwuruoha admonished the returnees and members to be united and shun any form of inducement from leaders of the left various parties and opposition.

Furthermore, he charged them to remain focused by avoiding distraction on the unstoppable movement of returning President Goodluck Jonathan back to office come 2015 general election.

Assuring their cooperation, leader of the returnees, Hon Kems Obichere promised to work in unity and in line with the Party's constitution. Therefore, he urged the Party leadership to see his followers as one, even while reminding Dr. Asoluka of his mandate as the consensus senatorial candidate of the people of Owerri Federal Constituency.

While ensuring the reelection of President Goodluck, Obichere added that 'keeping vigil over another good man's head who has transformed Nigeria, the hawk will not run away with his own'.

In a related development, the call for Okwuruoha to join the senatorial race of Owerri zone took to another dimension when Owerri West members of the People's Democratic Party (PDP) last Saturday stormed his country home in Ihiagwa.

Charging him with an ultimatum to join the race or get disowned as their apex leader, the Party's faithful submitted that power sharing and its dividends in the State had left them with nothing but an eye opening to throw support behind their sons and daughters.

'We have in the past seen how other areas joined forces together in supporting their own sons and daughters to better develop their place. Another opportunity has presented itself again, and if we fail to do that which is right, it means we will continue to gamble the future of our people.'

'Now that we are challenged, we want to present our son who has all it takes to run for any political position in this country; and we expect other areas to support us in this noble course. Right now, the only language we understand is that Okwuruoha must join the race or get disowned as our political leader,' unanimously said.