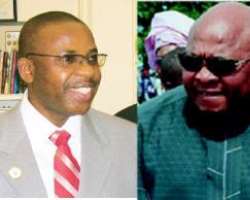 “False. There is instead high level pressure on Agbaso to accept money and contracts in compromise” replied Anthony Ugorji, a special aide to Martin Agbaso, over alleged bribery offered Martin Agbasso by the Governor of Imo State in the person of Ikedi Ohakim - to step away from his [Martin Agbaso] case slated to be heard at the Appeals Court in Abuja on November 12, 2009.

As Ukpakareports.com learnt from sources, Ikedi Ohakim had made a special trip to Lagos to the home of Martin Agbaso to offer him N500million in return for the withdrawal of his case from the Appeals Court, of which it was learnt that Martin Agbaso laughed at the offer and demanded for N5billion instead. To this, Governor Ikedi Ohakim was said to have laughed at the demand – stating that it was too high.

Unsuspecting, the recent attempts to reach a settlement with the All Progressive Grand Alliance [APGA] gubernatorial candidate in the 2007 gubernatorial elections has risen up to suspicious heights. This is as the catholic archbishop of Owerri in the person of Archbishop Obinna, Chief Pascal Dozie [Chairman of Diamond Bank], Council Iheanacho [Chairman of a shipping company] and other prominent personalities has been recruited to reach out to Martin Agbaso. And to this end, Ukpakareports.com was able to gather from sources knowledgeable of the political interplays in Owerri - all three named personalities [indeed] met up with Martin Agbaso over Ikedi Ohakim's case. Agbaso was said to be receptive to the dignitaries although with some hesitation.

Firsthand information has it that Martin Agbaso had reached the point where he considered withdrawing the case against Governor Ikedi Ohakim before he abruptly changed his mind. According to sources, Martin Agbaso had given some indication to emissaries of Ohakim of his willingness to withdraw the case if Ohakim would augment his N500million offer with contracts. But Martin Agbaso's aide denies this allegation as our correspondent pressed for more details. In their words, “take the information as it is. It is classified. But the offer will not be accepted, the pressure notwithstanding. It is all political.”

Another source indicated that Ohakim action added more gravitas to the unfolding intrigue and further pushed Agbaso into withdrawing from accepting his offer. Following the 'soft' assurances from Agbaso, Governor Ohakim went public. He publicly pronounced that Agbaso had requested N5billion to drop the case against him and INEC.

Fortified by what most believe is a sound case against the Governor of Imo State, along with the likely chances of Ikedi Ohakim's removal from the governor's seat, Martin Agbaso has thus upped to take his chances at the Appeals Courts in Abuja on November 12, 2009. Ukpakareports.com was informed of the manner the Judges in the Courts laughed at Ikedi Ohakim as he told them that he won the election of April 14, 2007. The Court presided over by Justice Dahiru Mustapha struck out the appeal filed by Imo state Governor Ikedi Ohakim and INEC, challenging the February 26, 2009 ruling of the Court of Appeal, which assumed jurisdiction to hear Agbaso's appeal. At the Court of Appeal, Agbaso had asked the court to clarify if it was possible to cancel the governorship election and uphold that of the State House of Assembly held simultaneously on the same day with votes cast in the same ballot box. While challenging the legality of the poll cancellation, Agbaso had attached the INEC result sheets.

It is recalled that on October 21, 2009 the Supreme Court ordered the Court of Appeal to hear the suit by All Progressives Grand Alliance (APGA), governorship candidate in the April 14, 2007 election in Imo state, Chief Martin Agbaso. And through this, it put to stop, the delay in allowing the court determine whether the Independent National Electoral Commission (INEC), has the power to cancel an election.

According to available information, the issue at hand was whether INEC can cancel an election held on the same day for the governorship and allow that of the state House of Assembly, as was the case in Imo state. This is because Agbaso is universally acknowledged as the winner of the governorship election in Imo State on April 14, 2007 which was held concurrently with the State House of Assembly election.

The INEC Resident Electoral Commissioner for Imo State, Austin Okojie had in affirming the sanctity of the State Assembly elections while it cancelled the governorship poll after results had been declared in about 80 percent of the wards in the entire state – cited that violence in 9 out of 27 local council areas – even though police report conflicts with the INEC's allegation. The police report indicates no significant instance of violence occurred on that day.

In all, Ohakim's gubernatorial seat appear a thorny experience - to the person of the governor and the governed. As Ukpakareports.com had reported earlier, the government presently finds itself operating through bankruptcy via borrowed finances at interest rates considered too high. This is in addition to the political realignment current taking form in the State's political class. As learnt, the supporters of Ararume has joined forces with the immediate former governor of Imo State and along with the stalwarts of the Peoples Progressive Alliance [PPA] to mount what now resembles a fierce opposition against the legitimacy of Ohakim as the Governor of Imo State. Already, calls of cancellation of the re-run elections that saw Ohakim as the victorious candidate are increasingly abound within the impartial observers of Imo State intelligentsia.